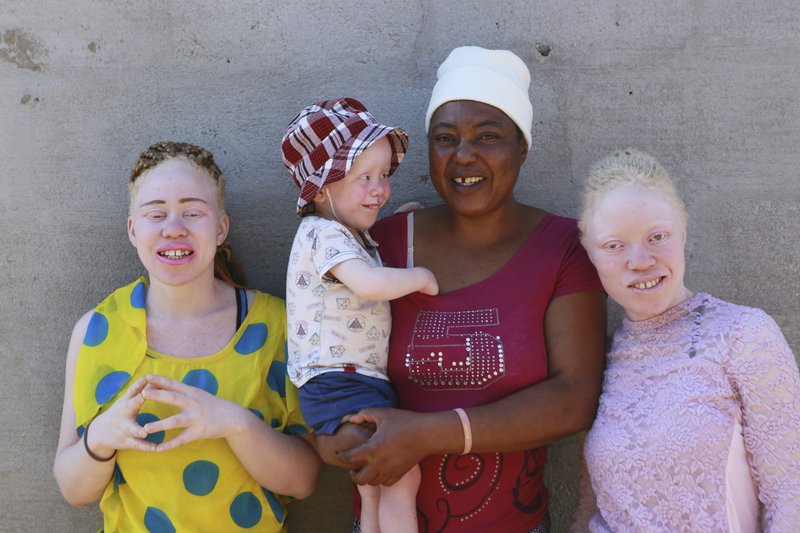 Agnes Humure has been forced to battle with albinism since the day she was born, when her mother was kicked out of her matrimonial home by her husband after giving birth to a child with the genetic condition.

But now, at the age of 41, she has had to contend with HIV, a decade after her husband, who infected her, passed away.

Residing in Zimbabwe’s capital, Harare, with her three daughters, all school-going, yet all HIV positive after they were conceived already infected with the disease, Humure has to bear the burden of ensuring their well-being even as she contends with discrimination, first over her albinism and secondly over her HIV status.

Humure said that since her husband succumbed to AIDS in February 2011, not a single person has visited her or her daughters and her husband’s relatives have prohibited her and the children from telling anyone about their HIV status.

Besides the discrimination many like Humure face owing to their albinism, her positive HIV status has added to her dilemma, worsened by the burden of having three HIV positive daughters.

But Humure said her husband did not have albinism.

Albinism is a rare group of genetic disorders that causes the skin, hair or eyes to have little or no color.

Discriminated at first for her albinism and secondly for having HIV, now Humure said the clinic she visits with her daughters to fetch their antiretroviral treatment drugs has become the only source of comfort for them.

“At the clinic is where we only meet very kind nurses and counselling officers who give us warmth. At home, sadly, nobody visits, with my own parents having died long back,” she told Anadolu Agency.

Humure is one of many HIV positive Zimbabweans battling albinism, although the government has no specific records of people with her condition suffering from HIV.

“We have no special statistics on HIV cases set aside for people with albinism. All Zimbabwe has are over 1.4 million people living with HIV, and obviously these also include people with albinism who may have the disease as well,” a health official at Zimbabwe’s Ministry of Health told Anadolu Agency on condition of anonymity as he was unauthorized to speak to the media.

While the government has apparently overlooked the HIV/AIDS plight of people with albinism, other women with albinism like 19-year-old Jane Ndamba claim they had narrowly escaped contracting the disease.

Raped due to albinism

“I was raped by my sister’s husband when I was 14 years old, and he kept raping me until the age of 17, when I became pregnant. He would beat me and hide me so that nobody would see me. I was recently tested for HIV and was found negative, and I am not sure if I would get the same results on going back for retests,” Ndamba told Anadolu Agency.

But the situation is even worse for some women with albinism who have in fact been raped by HIV positive men, in the process falling sick with AIDS and subsequently losing their lives.

Such are the testimonies from many Zimbabweans with albinism like Gwen Mushonga, the director of the Alive Albinism Initiative, an albinism charity organization in this southern African nation.

“It’s quite a tricky situation when it comes to women with albinism and how they can protect themselves from diseases such as HIV and AIDS. We have cases of women. I know of one who has passed away. She was brave enough to come out in the open and she told us like this is what happened to her. The husband knew he was HIV positive and he did not disclose his status to this woman with albinism, and in the end, the obvious happened — she tested HIV positive. It’s a sad story,” said Mushonga.

Traditional myths here have also placed people with albinism at crossroads as superstitious people have long regarded them as having healing properties for HIV and AIDS.

As such, women with albinism have often been raped and infected with HIV by men desperate to fend off the disease.

“The most challenging thing about albinism is that there is that myth where men in Africa and especially in Zimbabwe believe that if they have sex with an albino woman, they can be cured of diseases like HIV and AIDS, which is a shame and which is a lie, and this is putting a lot of our women with albinism at risk,” said Mushonga.

This, Mushonga said, comes from traditional healers who lie to HIV positive men that if they have sexual intercourse with albino women, their HIV condition would be healed.

Sadly, mired in solitude due to segregation, Mushonga said most people with albinism only get to find out about their HIV/AIDS status after they seriously fall ill, meaning some of them just die before getting treatment.

For Mushonga, HIV positive people with albinism in fact have to contend with a double tragedy — segregation because of albinism and discrimination due to their HIV status.

“You know it’s difficult for people with albinism who are HIV positive to come out in the open, given that they have this condition of albinism where they face a stigma. So having a condition of albinism and HIV is not easy, meaning such people would face double discrimination, meaning it’s not really easy for people with albinism to come out in the open about their HIV positive status,” she said.

Now Mushonga, living with albinism herself, said for women like herself, even finding true love nowadays has turned into a nightmare as they no longer trust the intentions of men dating them.

“We are not sure now when men come to us women with albinism, like are they really after love, are they genuinely in love with us, or are they are just trying to get rid of their HIV sickness? It’s quite a tricky situation when it comes to women with albinism and how they can protect themselves from diseases such as HIV,” she said.

Not easy for albinos to disclose AIDS status

Loveness Mainato, a mother of four children, two of whom have albinism, and the founder and director of the Albino Charity Organization of Zimbabwe, said it is not easy for people with albinism to disclose their HIV status.

“It’s because of the stigmatization they already have from birth that makes them fear to disclose their HIV status. It’s not that people with albinism are not infected or affected with HIV and AIDS,” Mainato told Anadolu Agency.

In her charity organization, Mainato said that so far, most death rates of people with albinism are a result of the dual ailments of cancer and HIV.

“We have lost seven people with albinism from our organization owing to cancer and HIV-related illnesses in the past three years,” she added.