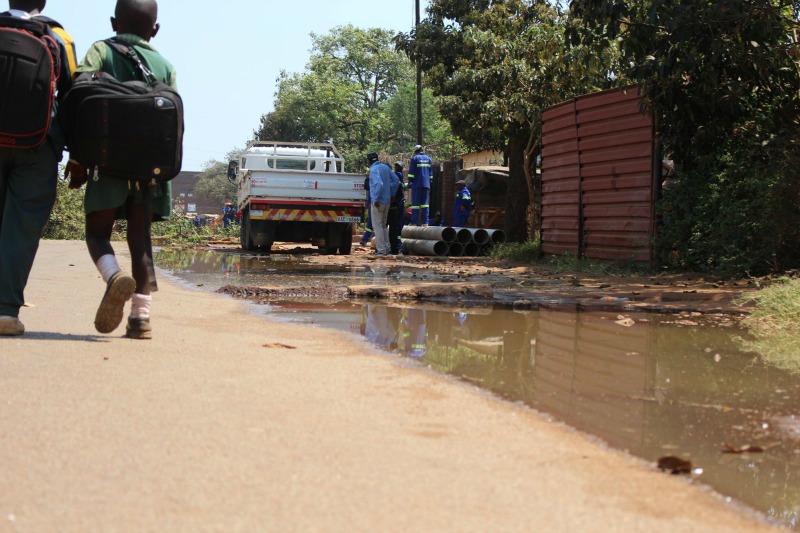 Zimbabwe is struggling with its worst outbreak of cholera in a decade, which has killed at least 28 people. An emergency has been declared and public gatherings banned in the capital, Harare.

A child is crying inside one tent. Another bears a handwritten sign: “Morgue”.

It is an eerie reminder that Harare’s old enemy is back, and it is stalking the weak and the vulnerable.

Men, women and children lie in other makeshift wards, some linked to rehydration drips.

Each stretcher bed has two buckets – one positioned beneath a hole in the bed for diarrhoea, the other to the side of the bed for vomit.

Cholera is a tragic, dehumanising disease.

An outbreak of the waterborne disease was confirmed by authorities in early September, killing five people and infecting dozens more.

Within weeks, the death toll had risen to 28 with more than 5,000 reported cases of infection.

Most victims die from dehydration caused by vomiting and diarrhoea. Many here believe these deaths could have been avoided.

Inside one of the hot tents, 42-year-old builder Zvidzai Chikava tells me he has been here for two days.

His daughter has been transferred to a hospital where most serious cases are being attended to. He believes they both contracted cholera by drinking water from a shallow well dug outside their home.

Sat opposite him is Paul Sibanda, a builder who says he and four other people in his home have contracted the disease.

“We almost always drink tap water,” he says. “But often when you leave it in a container, there is a substance at the bottom.

“Sometimes it has an odd, salty taste. But we drank it and never thought to treat or boil it.”

One day last week, 200 people received treatment at the clinic in the Harare suburb of Glen View. Glen View and Budiriro are the two areas worst affected – both are poor and overcrowded.

This outbreak is the first major one in a decade, but it pales in comparison to the previous one.

Between August 2008 and July 2009, some 4,200 people died from cholera according to the World Health Organization. It says 98,000 others were infected.

‘The stench of sewage’

Questions are still being asked 10 years on about why a preventable disease keeps recurring.

The answer is evident during a quick tour of the affected suburbs.

Dotted around Glen View, you hear and see gurgling streams of what looks like water. But the stench is a giveaway that this is in fact waste from burst and blocked sewage pipes.

Stagnant pools of sewage have been allowed to collect in front of homes. Children play nearby.

Health Minister Obadiah Moyo blames the opposition-run city council for the crisis. He says the blocked pipes were reported months ago but never fixed.

“As the health ministry we will not allow the city to sit on the their laurels,” he told reporters after touring a health facility.

But the problem runs deeper.

For years, refuse collection has been erratic with mounds piling up around most of Harare. Tap water supplies have also been unpredictable.

It has forced citizens to dig their own shallow wells and boreholes. Many of these have since tested positive for cholera.

The water infrastructure has been left to decay for decades. Water pipes are cracked, rotting and need to be replaced.

As a stop-gap measure, the new finance minister Mthuli Ncube has created an emergency crowdfunding campaign to fight the disease.

Some hail it as an innovative model to help overcome Zimbabwe’s many challenges. Many others believe it is an admission of failure from a government which they say has misplaced priorities.

They point to the government’s reported budget of $20m (£15m) worth of loans earmarked for new luxury vehicles for ministers.

It is one of his biggest crises since coming into power last November and the outbreak leaves a dent in his efforts to attract investors.

An international book fair has already been cancelled, while vendors are being moved from the streets in a politically sensitive and potentially volatile move.

The Zimbabwe Red Cross describes the situation as incredibly complex. A double blow, as most of the areas affected had already been battling typhoid – another waterborne disease.

Zimbabwe spends more than 80% of its revenue on civil servants’ salaries, leaving little left for anything else.

The Infrastructure Development Bank of Zimbabwe (IDBZ) estimates that the country needs to invest $26bn (£20bn) over a period of 10 years to upgrade its infrastructure.

This is money the country does not have, and it is unable to borrow it from the IMF or World Bank until it settles its arrears.

Already businesses and churches have stepped in to try and stem the crisis, by paying for water deliveries, buckets and water treatment tablets.

But without a long-term plan, financial investment and above all political will, this preventable disease will return again and again to claim more victims.