One of the cases is from Harare while two are in Mashonaland West province.

No further details were given about the three new cases, except that two of them were local transmissions from Mashonaland West.

The late Gogo Nguni, mother to former government minister, Sylvester Nguni died from coronavirus last week and was from Mhondoro in Mashonaland West.

“Of the PCR (Polymerase Chain Reaction) tests done in Harare, three were positive for COVID-19 and all the PCR tests done in Bulawayo today (Saturday) were negative,” the secretary in the Health Ministry, Agnes Mahomva said in her latest COVID-19 update.

“Two cases of the three cases confirmed today were due to local transmission. All three cases are stable, and not in hospital. More details on these to follow.”

Meanwhile, second COVID-19 tests done on samples taken from the late Gogo Nguni have come out positive. The second test was done after her family insisted the 82-year-ol lived in a self-isolated homestead and never got in touch with anyone from COVID-19 hotspots and also never left the country.

Government has intensified contact tracing in Chitemere village in Mhondoro-Mubaira, where she lived with two housemaids and two herders before she was taken to Harare for treatment.

The Harare City Health Department has also initiated a parallel process on her relatives in Harare, some of whom went to pick her up for treatment in Harare’s West End Clinic where she later died of the disease. 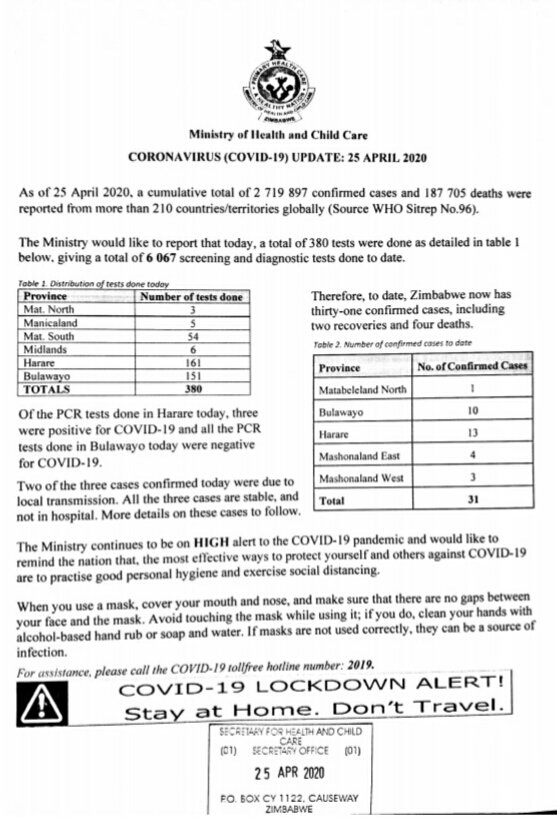