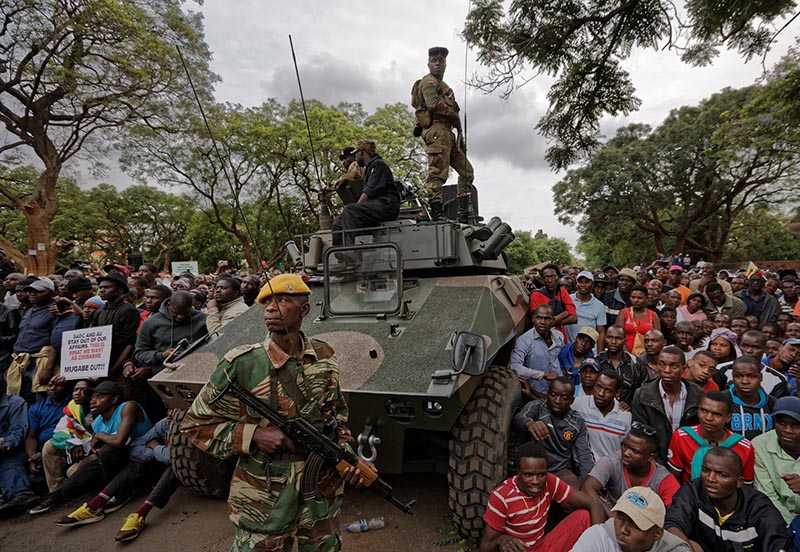 Harare ‑ It’s only a few weeks before the coup plotters celebrate the Second Republic, which came after the military helped oust Robert Mugabe, then-leader of the country for the first 37 years since independence.

With the coup having started on November 14, Mugabe succumbed to pressure and signed his resignation letter on November 21 when his long-time allies, among them Emmerson Mnangagwa and then-Zimbabwe Defence Forces Commander General Constantino Chiwenga turned their backs on him and opted to topple him.

Mnangagwa, having been fired from the government on November 7 following attacks by the G40 factional grouping and fleeing the country the next day after talks of a planned hit on him, returned home on November 22 from South Africa, where he had sought refuge.

On November 24, he was inaugurated as President, promising that Zimbabwe was open for business, her economy would boom, and jobs would open up.

Instantly, he was an avowed reformist. He travelled to all corners of the world trying to woo the support of the international community. All he came back with was promise after promise.

The investors were waiting on the July 30, 2018, elections to see if Mnangagwa would follow the law to the letter and to the spirit.

During the election campaign period, Mnangagwa promised guaranteed jobs, improved health facilities, money in the banks and in automated teller machines ‑ all in all, a new Zimbabwe. He claimed Zimbabwe had wasted several years in isolation under Mugabe.

The elections came and went. The electorate voted for their candidates, with the protagonists being Mnangagwa himself and opposition MDC Alliance’s youthful leader Nelson Chamisa.

Chamisa lost to his nemesis by a small margin and contested the win in the Constitutional Court. A ruling was made and Mnangagwa was declared the winner.

But now, the nation is licking its wounds.

First to spoil his supposed plans was the August 1 deadly shootings in the capital by the military, where seven civilians died as a result of gunshot wounds.

Since then, everything has gone ballistic. The legitimacy Mnangagwa was seeking following the November coup is seemingly up in smoke.

Next was the cholera epidemic which claimed the lives of 54 people and left thousands seeking medical attention after a breakout of the waterborne disease in Glen View and Budiriro high-density suburbs.

Now, the economy is burning. And there seems to be no solution in sight as yet.

On October 1, the government scrapped the US$0.05 flat fee charge for every electronic or mobile money transfer or payment transaction and replaced it with a new tax regime, where both individuals and companies would be charged US$0.02 for every dollar transacted.

With a lot of public outcry and resistance, new finance and economic development minister Mthuli Ncube rejigged the policy, exempting all transactions under US$10 and putting a cap of US$10 000 charge for any transaction above US$500 000.

But still, the situation has turned grave.

The transfer rate has gone haywire, at one point shaking the market after shooting through the roof to 600%, meaning a $600 transfer for every US$100.

The authorities blame illegal foreign currency dealers for the crisis on the market. Law enforcement agents have already been set on the street forex dealers. But the opposition says fiscal indiscipline by the government is the major source of the country’s problems.

Fuel queues, a few weeks ago, snaked out at service stations, where either petrol or diesel would have been delivered.

At some stations, it’s either the fuel tanks underground were empty, or the little available was reserved for those with cards.

At others, the fuel attendants limited what motorists could get.

For now, the situation has improved a bit, with the government said to have stocked up.

In shops, prices are going up on a daily basis, if not by the hour.

There are now multi-tier pricing systems in several shops.

Basic commodities like cooking oil and sugar, if available, are being rationed in shops.

Even beer in most shops has not been spared the rationing.

At pharmacies, the attendants are demanding foreign currency for one to get medication. They have even inflated the prices in US dollars.

For blood pressure pills that usually go for $9, the price has jumped to around US$20, or about $160 in the surrogate bond note or transfer rate.

Meanwhile, Chamisa claims the crisis will only halt if Mnangagwa concedes that he stole the July 30 election.

He says only legitimacy will solve the situation Zimbabwe finds herself in.

Chamisa’s MDC Alliance party maintains no investor would want to pour their money into a “bottomless” Zimbabwe.

Economist Chris Mugaga says the government is “clearly running out of ideas and time”.

“The government sold the nation a dummy for too long. They were milking a buffalo thinking it’s a cow, now it’s kicking them from its udder and they are wondering why,” he was quoted recently in private media.

The Zimbabwe Council of Churches has tried to bring Chamisa and Mnangagwa to the negotiation table for a way out, but that option seems to have hit a brick wall.

“Elections were held and are gone…Let’s look ahead in terms of our economic development, that is the challenge we are facing, the stabilisation of our economy…” Zanu-PF spokesperson Simon Khaya Moyo was quoted as saying recently.

The ruling party insists its leader Mnangagwa’s doors are open to anyone with a solution to the crisis.

It’s only a matter of time before anyone knows which direction the co country is taking.