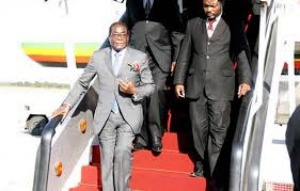 I REGULARLY drive myself between four Zimbabwean cities – Harare, Gweru, Mutare and Bulawayo. Such errands are not just about my legal practice. If you are a serious leader of a national political party, you need to maintain a vigil of physical contact as often as possible in the area bound by the country’s foremost industrial, commercial, mining, agricultural and rural settlements.
Flying around at high altitude in a white helicopter will of course give you a surrealistic panoramic view, but keeps you detached from realities on the ground. Moreover, zooming past bemused citizens in a twenty-car Mercedes Benz convoy flanked by five BMW motorcycle outriders does create some sort of dramatic impression but would hardly afford one the intimacy needed to appreciate challenges that bedevil citizens in their day-to-day lives.
It is during my road trips that I encounter serious traffic accidents and thanks to our dysfunctional emergency public health delivery service, victims spend several hours in distress before receiving crucial first aid.
I always notice when, eventually a medical team arrives, they try and talk to as many victims as possible. Those who respond and point to broken limbs receive less attention than those afflicted with life-threatening injuries. In fact, when there is a case of muscular injury that exhibits serious arterial rapture and incessant blood loss, even the medical team gets into a state of panic to try and arrest the haemorrhage. In other words, it is crucial to get such a patient to hospital as soon as possible for blood transfusion, but whilst they are lying in painful helplessness on the tarmac or grass, what becomes urgent is to stop blood loss. Unchecked, this loss can result not only in brain damage, but fatal cardiac arrest. Such is my country Zimbabwe’s state of economy.
When ZANU PF ‘allegedly won’ the 2013 presidential and parliamentary elections they rode on a myriad of dazzling false promises of economic growth, employment creation and empowerment. As it stands now, the country is experiencing its worst economic and social crisis since 2000.
Our national monetary and fiscal system has been bled dry. We have passed the stage of cardiac arrest-induced shock and fast approaching brain-dead comatose.
One of the most vital ‘fluids’ that drives economic well -being and survival – money –has dissipated. A country with no savings, no national reserves, no import cover; a country that cannot pay its civil servants, service domestic and foreign debt or even pay rentals for its ambassadors is a failed state. President Robert Mugabe and his ZANU PF ministers, Legislators, Governors, Chiefs and Headmen must hang their heads in shame. If Zimbabwe was a truly democratic country with men and women of honour and integrity in government, President Mugabe and his team would have resigned yesterday.Advertisement

There is no country, economy, community, institution or even family unit that operates effectively without money. Zimbabwe boasts some of the best national endowments – natural and human – so how have we found ourselves with empty national coffers, empty bank accounts and empty pockets? How is it that a country that exports the best of everything in the region; human capital, tobacco, gold, coal, diamonds and tourism – has no money? This is the billion dollar question I want to attempt to answer this week – at least without indulging in juvenile soon-to-graduate-PhD-economics-student-type rhetoric.
The first problem we have is that as a country we are not generating enough money internally. This has nothing to do with importing more US dollars or printing Zimbabwean ‘bond’ notes. It has everything to do with a strong vibrant industrial, commercial, agricultural industry. When a country is operating at full capacity – like Tanzania, Kenya and South Africa – locally made goods and services are exchanged for money locally, and cash circulates abundantly. Zimbabwe has literally stopped producing anything and all the little money that is around is used to import onions, oranges, potatoes, cooking oil and cabbages. Between 2000 and now, ZANU PF’s political and economic policies have been so destructive to local industry that all citizens do is import cars from Japan, clothes from China and groceries from South Africa. Billions of dollars cross our borders every quarter to quench our thirst for consumer, not capital goods. Thousands of Zimbabweans – including President Mugabe, his family, ministers and of late, Morgan Tsvangirai – pay millions of dollars to hospitals in Singapore, Mumbai. Dubai, Cairo and Johannesburg to access ‘proper’ medical care. Thousands of young people – our children – pay millions of dollars to universities in Australia, Cape Town, Germany, United States and United Kingdom to access ‘proper’ higher education.
Then comes President Mugabe’s foreign trips. This year alone President Mugabe has had no less than twenty foreign trips overseas, taking with him a large entourage each time. I have no doubt that he can easily be a contender in the Guinness world records as the most travelled Head of State. As a nation, we find ourselves asking, what have we benefitted from all these trips which gobble up millions of dollars? We are yet to see the fruits of these costly travels.

At the business front, we all know that large multinational corporations in Zimbabwe source raw materials and machinery from abroad. However, some of them – because of years of a weak and corrupt central banking system – either do not remit resultant export proceeds back to Zimbabwe, or simply inflate the cost of imports in order to ‘transfer’ the excess price to the external supplier. In the past fifteen or so years, the ZANU PF government has violated civil and political rights to the extent that international financiers have minimised if not cut off business relations with Zimbabwe. In desperation, President Mugabe invited Chinese and Russians to ‘invest’ in Zimbabwe. This is fictitious foreign investment because all they do is bring in finished goods and labour then take out millions of US dollars out. There is no transfer of technology, sustainable use of local labour or value addition. Imagine the millions in tons of raw tobacco exported to China at cost and how many trillions of cigarettes Chinese tobacco companies then manufacture in Beijing on our account. What a loss for us in hard currency!
Finally, since we are under a corrupt government, ZANU PF political and capitalist cronies who make millions of dollars in tenders do not keep their contraband in the country. Like most wealthy citizens in government and private sector, they have no confidence in the future of the country, thus would rather keep their money in offshore accounts. Therefore, it is shocking that almost ten years after diamonds were discovered in Marange, it is only now that President Mugabe ‘notices’ that fifteen billion dollars is missing. Here are the facts: all diamond companies in Chiadzwa were run by individuals with direct military, civilian and business relations with ZANU PF. So when these gems were being ‘exported’ without equivalent remittances, where were the officials in the Reserve Bank of Zimbabwe, Zimbabwe Mining Development Corporation and the Minerals Marketing Corporation looking? Where was ZIMRA and the air force as small planes flew into, out and across the eastern borders? Hundreds of high-level government officers who travel outside the country, including presidential delegates to numerous international conferences: who monitored how much money they took out? It will therefore take a government elected on the basis of popular credibility to eliminate this monetary and fiscal haemorrhage – the type of government I have in mind had I to be afforded that opportunity in 2018.