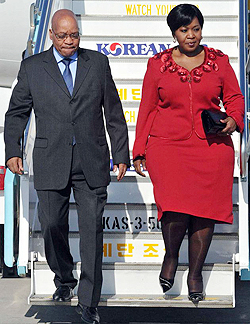 SOUTH African President Jacob Zuma is a man better known for his survival during trying times than his leadership of Africa’s biggest economy. Many will recall Zuma’s energy, endurance and fighting spirit when he sang Mshini wami while facing rape charges, corruption charges and all that political opponents could throw at him.
Zuma, with the help of that ANC Youth league master of battles, Julius Malema, emerged victorious and danced his way to Union Building and South African Presidency.
All that was personal and on home soil. His biggest challenge and source of headache may yet be across the Limpopo border in Zimbabwe in a week’s time when the troubled neighbour is due to have harmonised elections that may not bring harmony.
Zuma is said to have lost his mentor when he was still young. Unlike the likes of Nelson Mandela who were privileged with education, guidance and mentorship from an early age, Zuma had to struggle through life to establish himself. It is rumoured that most of his formal education was actually informally acquired behind the prison walls of Robin Island where he spent a decade with Madiba and other ANC heroes.
Zimbabweans who fought in the war of liberation will remember Zuma from the days of Umkhonto Wesizwe where ironically he ended up having the same role of intelligence chief as Dr Dumiso Dabengwa of ZAPU.
Zuma’s troubles while he worked his way up to South African Presidency are well known, as are his challenges during his presidency, with ANC struggling to fulfil the promised post apartheid land of milk and honey.
Why then would Zimbabwe give this veteran of battles the worst nightmare?
There are four potential scenarios in Zimbabwe come August 5, 2013. The world can wake up to a Robert Mugabe victory, a Morgan Tsvangirai victory, a Welshman Ncube victory or a no outright victory where a run-off will be necessary.
A victory for Mugabe or Tsvangirai would, for different reasons, leave Zuma in mud and political leg chains, staring at a tsunami in his own homeland.
Let us begin by acknowledging that Zuma is the SADC facilitator in Zimbabwe charged with ensuring that the tribalised, polarised, bloodied, corrupted and unpredictable politics of Zimbabwe is sane enough to produce an election that can lead to stability, security and harmony. Zuma inherited this role from former President Thabo Mbeki and never volunteered.Advertisement

The so called international community (read the West), has vested interests in Zimbabwe, so important an effort has been made to send in election observers in vain. Zimbabwe is the economic gateway to SADC and a rich one at that. Very rich indeed; both in natural and human resources. SADC therefore, and Zuma in particular inevitably become the centre of it all. “All eyes on us.”
Zuma has to be seen to be impartial by the Zimbabwean political players. President Mugabe has already upped the stakes by lambasting Lindiwe Zulu, one of Zuma’s chess pieces in the Zimbabwean saga. She is like the Knight piece, with a tendency to gallop over other pieces with her speeches. She even dared to venture into dangerous squares. That was “unauthorised,” and “unfortunate,” the King declared through Mac Maharaj, the Bishop.
Many, especially the MDC-T, are unlikely to accept a Mugabe victory no matter how genuine and credible that result maybe. Chimney or no fireplace, there is precedence in MDC-T claiming to have seen smoke. The system is perceived to be sympathetic to Mugabe and his party, ZANU PF. This includes the Zimbabwe Election Commission (ZEC), the Registrar General’s office and everything else that moves. It does not matter at all how professional they can be. Candidate Tsvangirai has even challenged ZEC to prove there is no rigging. One may be forgiven for thinking it is a script from Tour de France. A joke is doing the rounds that MDC-T have already drafted legal papers to challenge the result of the election.
Back home, a Mugabe victory is likely to inspire the likes of Malema and the Economic Freedom mantra. Mugabe is mistakenly seen as pan African and anti West by those Africans (outside Zimbabwe that is) who seeks economic justice. Zuma would not want events across the border to fuel the resurgence of Juju mania after Marikana.
A victory for Tsvangirai meanwhile would even be worse for Zuma. The MDC in 1999 was formed following the inspiration of trade union politics in Chiluba’s Zambia. The ANC is facing challenges in its alliance with COSATU. A Tsvangirai Presidency could similarly inspire COSATU to finally brave it out and go it alone. A new COSATU backed political party in South Africa at a time when the ANC is facing challenges due to lack of delivery could define the beginning of the end of ANC dominance in South Africa. Zuma would not want to be the ANC President that presides over the fall of the political giant that delivered so much to so many.
Interestingly, an Ncube-Dabengwa victory would be the best for Zuma. Not because Welshman Ncube’s son married Zuma’s daughter with AU head Nkosazana Dlamini-Zuma, or that Zuma and the likes of Chris Hani and Dr Dabengwa fought  side by side during the liberation wars, but because that election victory is unlikely to be disputed, or to lead to further crises.
The army is unlikely to bloke a transfer of power to Dabengwa, one of their war heroes. The parties in the Ncube-Dabengwa coalition have no history of corruption, violence or immorality. Despite having been in Unity Governments at different times, they were able to demonstrate capacity to run government departments in a way that would make Zimbabwe a credible country to do business with. A happy ending to a nightmare story.
But then, Zuma has no vote. The international community including Britain and America will not vote. Zimbabweans will exercise their democratic right to choose a candidate of their choice. That choice may lead to chaos or stability. In the event of chaos, Zuma’s experience in conflict resolution in Burundi, Mozambique, and KwaZulu- Natal could be handy.