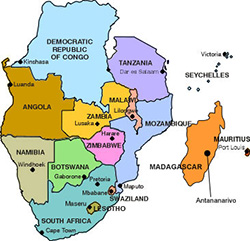 ZIMBABWE’S exports into the Sadc regional market have plummeted from as high as 30% in 2005 to an all-time low of 11%, a regional socio-political and economic block said Wednesday.
Boitumelo Gofhamodimo, Sadc’s director for Trade, Industry and Finance told journalists at a press briefing in Victoria Falls that despite the decline, Zimbabwe remained the region’s second biggest exporter after South Africa.
“I am also not sure about the figures I have but they show that, Zimbabwean exports into the region have declined from as high as 30% about 10 years ago to about 11% as of 2012.
“However, Zimbabwe also remains the second biggest exporter into the regional market after South Africa,” said Gofhamodimo.
Towards the turn of the century Zimbabwe, once Africa’s bread-basket and the one of the continent’s brightest economic prospects, embarked on the land redistribution exercise that often turned violent in a bid to “address colonial imbalances”.
The move turned awry when the once thriving agricultural sector was brought to its knees after former white commercial farmers were pushed off their farms leading to an economic meltdown that also turned into a political problem.
Western countries also reacted by imposing sanctions, worsening the economic and political crisis.
Gofhamodimo added that another problem for Zimbabwe was that of debt with the country’s domestic liabilities at one time going beyond 100% of Gross Domestic Product (GDP).
“However, Zimbabwe has worked hard and in the past few years this has gone down to about 70%. We had also set a target of at least 3% of GDP for all countries in the region but it has not been easy to sustain that target,” she said adding the reasons for this situation were varied.
Zimbabwe external fiscal debt currently stands at about $11 billion with the country’s finance Minister Patrick Chinamasa having been on a global jaunt with a begging bowl looking for budgetary support.
There are indications the country might receive a rescue package from China next month.

Said Gofhamodimo: “The danger we have member states who are borrowing for consumptive spending while others are borrowing to fund capital projects as in the case of Mozambique and Zambia who have gone beyond 7% but with the spending has an expectation of future return.Advertisement

“For Zimbabwe they are operating a cash budget which is good for them in the interim but toxic for industrial growth. Whether they get the loans they are seeking is another matter because what is important is how they spend the money.”
She said exports in the region had grown into billions, comprising products being sold outside Sadc.
“We have uranium and tobacco from Malawi, Zambia has resumed copper exports and Angola is now a major player in the global oil industry.
“These countries have not concentrated on the regional market and their therefore it is difficult to juxtapose their size with Zimbabwe,” Gofhamodimo said.