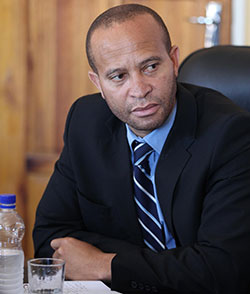 ZIMBABWE’S first ever central securities depository firm, Chengetedzai Depository Company on Monday commenced the migration of paper-based titles into new electronic shares with three counters going live.
Cottco, CBZ and FBC are now live, with 15 more counters scheduled to be included within a month while the remainder will be integrated by end of November.
Addressing journalists at the launch, Chengetedzai chief executive, Campbell Musiwa said the Central Securities Depository (CSD) system would offer safer storage of securities and facilitate their transfer from one party to the other through an automated book entry.
The system, would also allow for faster electronic clearance and settlement of trades done on the Zimbabwe Stock Exchange (ZSE).
“The key advantages of bringing a CSD to any country is the issue of efficiencies. The settlement timeframes is going to be reduced,” he said, adding that the country was taking more than seven days to process transactions which would soon be reduced to four or less.
“We have also set a target, the Securities and Exchange Commission has mandated us to bring the settlement timeframe to (trading plus three days) by June of next year,” he said.
The CSD will also facilitate the trading of Treasury Bills, bonds, repos and commercial bonds.
Musiwa said foreign investors were interested in investing in a country with a CSD due to its efficiency, citing the American pension funds that were not allowed to invest in a country without it.
At least 60 to 70 percent of the country’s trades on the ZSE are by foreigners.
Securities and Exchange Commission of Zimbabwe (SECZ) chief executive, Tafadzwa Chinamo said the new system was a vital step in building the infrastructure that was lacking in the country.
“We are the only country right now that is on seven-day settlement but possibly the only one also doing an open outcry system where everything is manual and that frightens a lot of people,” he said.
As part of the efforts to modernise trading on the ZSE, he said the CSD would interface with the Automated Trading System (ATS) to be launched by end of this year.
“It opens endless possibilities on the market and because of this we can also dream about transacting via the cellphones,” Chinamo said.Advertisement

He said the system guaranteed security, prevented abuse of share certificates and cut on time spent with some transactions taking three weeks to process.
ZSE chief executive, Alban Chirume said the CSD would complement the new ATS which seeks to replace the open cry system.
“In doing that we need to settle both the securities and also the cash and that is where we interface with Chengetedzai,” he said.