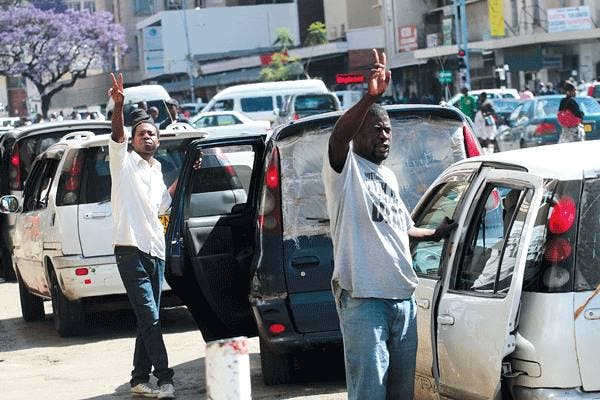 IT is early Monday morning around 7am, and Donna Nyadete (28), is already stuck in a traffic jam on her way to work in the central business district (CBD) of Harare, Zimbabwe’s capital.

“I use the Seke Road daily to my workplace, and the traffic jam is nasty especially during the morning and evening,” she said.

“The road to the CBD is unnavigable with impatient drivers such as private car drivers known as ‘Mshikashika’ who are a menace.”

Besides congestion, accidents occur all the time while ‘road corruption’ has also become a common feature where private car owners and the ‘Mshikashika,’ pirate major routes in the cities.

The Zimbabwe Road Safety Council noted road carnage has become a worrying trend in the country, as some drivers even operate without licenses to ferry passengers.

Data published by the World Health Organisation in 2018 also indicated that the Road Traffic Accidents Deaths in the country reached 7 667 or 6.46 percent of total deaths.

The ever growing desire by Zimbabweans to own cars led to a rise in car imports, specifically the ex-Japanese models, with some vehicles being more than the stipulated age of five years, said Transport Minister, Joel Biggie Matiza.

During the Africa Transport Policy Programme (SSATP) annual general meeting in Victoria Falls last December, Matiza said Zimbabwe had more than 900 000 ex-Japanese models, some of which came with serious defects causing accidents while others were already grounded due to lack of spare parts.

The Climate Change Management Department under Zimbabwe’s Ministry of Lands, Agriculture, Water, Climate and Rural Resettlement says most of the imported cars failed to meet global emission requirements and contribute to the increasing transport sector led emissions in the country.

Lawrence Mashungu, a climate change mitigation and renewable energy expert who works in the same ministry, said: “Most of the cars that we have in Zimbabwe are from developed countries such as Japan, China, Singapore, the United Kingdom and the United States. Those cars are dumped here in Zimbabwe mainly because they would have failed the emission level tests in those jurisdictions.”

While some of the cars come with catalytic converters that reduce emissions, the problem is they have become the ‘new gold’ as the converters are removed and sold on the illegal market, which hampers Zimbabwe’s efforts to move towards sustainable transport systems with reduced emissions, said Mashungu.

Catalytic converter dust, rich in platinum, palladium, gold and other minerals, has a ready market in Zambia and South Africa where it fetches over USD$200, according to one vehicle mechanic who identified himself as Trevor Mavima.

“Unsuspecting motorists always lose their catalytic converters to thieves who make a killing by selling them illegally,” he said.

A motorist, Tapfuma Machakaire, confirmed he was duped by a mechanic in the CBD who made him believe the removal of the catalytic converter device improves an engine’s efficiency.

“As we speak, my car doesn’t have the catalytic converter device because it was removed by the mechanic,” he said.

“I was lucky to be present when the mechanic removed the part while fixing my car’s exhaust repairs, as he paid me USD$65 for its powder.”

However, Amkela Sidange, Environmental Management Agency (EMA)’s environmental education and publicity manager, warned motorists against removing the catalytic devices from their cars’ exhaust’s systems, adding it was harmful to the environment and negatively impacting on climate change.

“These catalytic converters have an efficiency of plus or minus 80 percent of converting harmful gas to a lesser toxic gas into the atmosphere,” she said.

“So, when the catalytic converters are removed from cars, it means we are going to have more toxic gases and emissions into the atmosphere, which impacts negatively on our climate.”

Sidange indicated EMA was empowered by the Zimbabwean laws to monitor and inspect vehicle exhaust emissions in the country.

“Those vehicles that are found emitting harmful toxic, outside the specifications are either given an environmental protection order to go and fix their cars or are fined on the spot,” she said.

According to Mashungu, the total annual Green House Gas (GHG) that was emitted in Zimbabwe in 2015, was 22.0 MtC02e, which constitutes 0.045% of global emissions.

Although car-ownership is seen as an economic development indicator bringing mobility to many Zimbabweans, it has brought a serious challenge for town planners in cities, who need to balance motorisation with urbanisation, energy and economic growth under one sustainable framework.

Dr Prosper Chitambara, an economist and researcher at the Labour and Economic Development Research Institute of Zimbabwe (LEDRIZ) said a viable transport system was a key enabler of economic and sustainable development.
“Sustainable transportation is both a public and a merit good, plus there is room for the government to invest more in road infrastructure in general,” he said.

“Once infrastructure is good, it helps crowd investment in the private sector.”

Dr Chitambara noted a sustainable transport system required both government and the private sector to work together.

He said, as the informal sector and private motorisation expands, the city’s main urban public space increasingly gets more congested, impeding rather than facilitating the urban population’s ability to access the required social and economic services.

Dr Chitambara added: “That has been the best practice regionally and internationally. The private sector can also play a role because coming up with a transit transport system takes time and a lot of resources. During that process of doing that we need to allow even private sector transport operators to support the government.”

In April, 2019, the state media reported that the City of Harare had been approached by China Nanchang Engineering, a Chinese company with a deal to supply 600 solar powered buses to service its metropolitan.
However, the deal is yet to see the light of the day.

A town planning expert, Dr Samukele Hadebe, said with no coherent policy on managing the transport sector in the country and redesigning public sector models, use of electric buses, seen in countries such as the Philippines remained a pipe dream for Zimbabwe.

Meanwhile, the use of solar power is gaining traction all over the world. African countries such as Uganda now use the Kayoola Solar Bus, a 35 seater electric solar bus with zero tailpipe emissions.

In developed countries notably Australia, the use of a Tindo solar battery charged bus has been on trial since 2007.
Emerging global power, China also built the world’s largest floating solar installation in Southern China and produces two-thirds of the world’s solar panels.

The use of the first solar hybrid buses hit the streets of China as early as 2012.

Reports have indicated the more countries move to cleaner energy, the more solar power is likely to grow even further.

Countries are on a drive to eliminate carbon emissions from diesel-powered engines, which contribute to global warming and that is why electric vehicles are seen as an alternative solution.