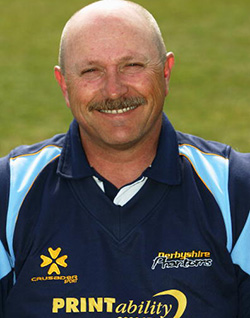 FORMER Zimbabwe captain David Houghton is to replace Mark Ramprakash as Middlesex’s batting coach, the county have announced.
Houghton, who held the same post at Somerset last season having previously been head coach at Worcestershire and director of cricket at Derbyshire, has signed a two-year contract with Middlesex and will officially start on January 1, 2015.
The 57-year-old, who was also formerly coach of Zimbabwe, takes over from Ramprakash, who last week became England’s new batting coach after two years working with Middlesex’s batsmen.
Houghton will take over at Lord’s when his contract for a similar post at Somerset ends on January 1.
He has vast experience in both the international and domestic games. As a player, Houghton won 22 Test caps for Zimbabwe, scoring four centuries including 266 against Sri Lanka in 1994.
“I am really looking forward to getting started and building on the great work already undertaken by the club’s previous batting coach, Mark Ramprakash,” said Houghton.
“We have a fantastic group of talented and gifted cricketers here at Middlesex and I can’t wait to begin working with them all.”
Middlesex director of cricket Angus Fraser added: “Everyone at the club is looking forward to working with him.
“As well as being an excellent batting coach, David has a wealth of knowledge that we can tap in to.
“David is a real cricket man. He loves being around and talking about the game and having spent time coaching at Radlett CC he knows the area and what Middlesex CCC is about.”
“His coaching time will be split over the whole club. David will spend time working with players from Middlesex CCC’s first XI, second XI, academy and youth sides.”Advertisement