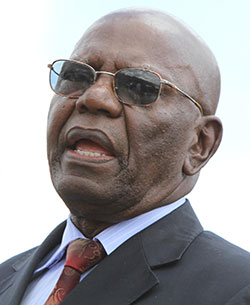 NOT long ago, Zanu PF “chefs” and blind followers praised land redistribution as one of President Robert Mugabe’s major successes, an epitome of his three-and-half decades of leadership. We were told that people had been empowered by giving them back their land.
After this “success” which has paradoxically brought our agro-industry to its very knees, Zanu PF mafia masquerading as state actors extended their proclivity for extortion to mining and other industries under the pretext of indigenisation. The results are there for everyone to see; a rundown country and the emergence of the vendors’ economy.
That land reform was a necessity in post-colonial Zimbabwe was never objectionable. Some of us who grew up surrounded by farming communities know very well what it meant for one farmer to own prodigious swathes of land, some of which was only kept for purposes of decoration, status and self-esteem. However, there were also a lot of farmers, white, black or brown, who fully utilised their land which benefitted the national economy primarily in terms of employment and exports.
Our children would be forgiven for imagining that it is the most hyperbolic fairy tale of their time for anybody to say that Zimbabwe was once one of the biggest exporters of beef to Europe as well as a top exporter of tobacco to the international market. We literally fed the Southern African region and produced sugar for the world market.
In 2000, when serious opposition was rising, curiously, that’s when Zanu PF suddenly discovered that Zimbabweans needed land, 20 years after independence! Without any planning, thugs were unleashed onto commercial farms where they literally took the law into their own hands. Innocent lives and valuable property were lost during the state-sponsored melee. The government sat back and simply watched the destructive and dangerous “drama” unfold. Later, Zanu PF chefs climbed down their ivory towers and started claiming ownership of what they called land reform program.
In previous years, President Mugabe had condemned what he referred to as “farming by remote control”. He also spoke vehemently against multiple farm ownership. When owners were violently and haphazardly driven out of their land, Zanu PF chefs moved in, progressively taking farm after farm. Some of them literally lost count of the number of farms they occupied. Ironically, as people were “empowered”, the economy, conversely, was disempowered. Some would rush to blame this on sanctions; that’s nonsense!Advertisement

Just this week, we woke up to the expected news that Mandi Chimene had taken over one of Didymus Mutasa’s many farms in Manicaland. Recently, Zanu PF youths were reported to be planning an invasion of one of Temba Mliswas’s farms. Slowly, we are being bombarded with the open admission that Zanu PF chefs are indeed multiple farm owners. The only reason some of them are not being persecuted or exposed is because they are still active and pliant members or leaders of the terribly unpopular and dismally failed party.
Given what we now know, there was never genuine land reform in Zimbabwe. Rather, there was land extortion by only a few and land redistribution to Zanu PF cronies. Some gullible Zimbabweans were then bribed with trinkets in the form of unproductive pieces of land only fit for wildlife; the type of land that “chefs” would never want to have even for chicken farming or dog breeding.
By disingenuously attempting to rectify land imbalance, Zanu PF has actually created a situation worse than before. It is for this reason that progressive Zimbabweans will always hold the strong view that bona fide land reform is yet to happen. What has transpired so far is primarily agrarian criminality coupled with patronage and political madness. For our economy to benefit from land, our God-given resource, there has to be an independent and meticulous audit and verification of the land reform program, not in the form of George Chiweshe’s warped definition of “meticulous verification”!
While reversing land reform is both unnecessary and impractical in the post-Zanu PF or post-Mugabe dispensation, sanitising it is an absolute necessity.
Until such time that we come to an agreement as a people that land is a national economic asset and not a partisan political tool, which must be accessible to every deserving citizen irrespective of pigmentation or dialect, Zimbabwe shall forever be haunted by the ghost of land reform. Even Mugabe knows this for a fact, hence, his advice against building permanent structures on occupied land. We have never heard him reverse this stance. Zimbabwe’s land reform is far from over.
Moses Chamboko is a pro-democracy activist and interim Secretary General for Zimbabweans United for Democracy (ZUNDE). You may visit ZUNDE at www.zunde.org or email info@zunde.org.