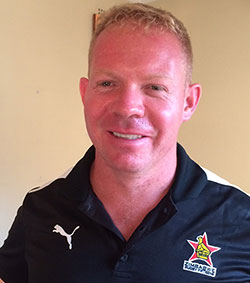 LIAM Middleton has been appointed coach of the Canadian men’s rugby sevens team.
The 37-year-old Zimbabwe native succeeds Geraint John of Wales, who quit this summer to take over the Australian sevens side.
Most recently, Middleton was director of rugby of the Zimbabwe Rugby Union and has served as Zimbabwe sevens coach since 2004.
“Canada is a team with growing potential and I feel that I can make a difference both on and off the field,” Middleton said Friday from Zimbabwe.
His hiring is subject to Canadian immigration requirements.
Middleton has coached at English Championship side Bristol as well as England’s Hartpury College and South Africa’s Howick High School. He also worked for England’s Rugby Football Union.
“I’m passionate about sevens rugby,” Middleton said.
“I love the game and I hold a strong ambition to coach on the Sevens World Series. Canada is a team with growing potential and I feel that I can make a difference both on and off the field. So I felt that this job was a good fit.”
“We’re very excited to have Liam joining our coaching staff,” Rugby Canada high performance manager Steve Lancaster said in a statement.
“We went through an extensive application and interview process, and there were a number of highly qualified candidates from around the world, including one Canadian.”
Canada has 19 centralized players this year, including veterans Nanyak Dala, John Moonlight, Phil Mack, Nathan Hirayama and Sean Duke.
“A very athletic group of players, hard-working, with a great team spirit,” said Middleton.
“They play to their strengths, and they are a team that can make improvements.”
The Canadian men had a breakthrough season in 2013-14, finished sixth overall compared to 12th the year before. Canada also posted a best-ever runner-up finish at the circuit’s stop in Glasgow, Scotland.
“I believe that there is a place at the top table for Canada sevens,” said Middleton.
“The series is getting more competitive with this year likely to be the most competitive to date and there were some teams that heavily underperformed last season who will be much harder to beat this year.
“At full strength and well-prepared, I believe Canada can beat any side on the circuit. I’d like to see the team win a (World Series event).”Advertisement