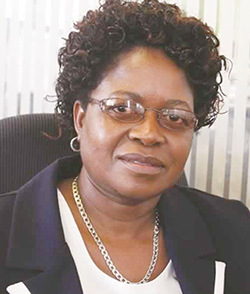 HARARE: Zimbabwe’s loans register is in shambles and the country may have been prejudiced of more than $100 million in fictitious loan repayments, a report by the Auditor General Mildred Chiri has revealed.
The report, which was tabled to Parliament on Wednesday, showed grave inaccuracies in Treasury accounts and a general slack in the reporting system across ministries and statutory funds.
The most glaring is the fact that the exact amount of government guaranteed debts and loans extended to the state or its entities is unknown.
The report notes that Treasury has failed to properly maintain a Statement of Public Debt, which details loans contracted by the state.
“The Ministry resubmitted an amended Statement of Public Debt for the year ended December 2014 with an adjusted balance of $5,4 billion from an initial balance of $5,9 billion just before the end of my audit without any explanation for the variance. Furthermore, principal and interest payments of debt amounting to $116,756,279 were made without providing supporting documents,” Chiri said in the report.
“The loans reflected on the Statement may not be authentic and the Statement maybe materially misstated.”
According to the report, Treasury Bills and Bonds issuance notes with a value of $647,794,516 were availed for audit examination against a total of $1,190,675,248 disclosed in the Statement of Public Debt.
Treasury also failed to timeously update the Register of Guarantees and did not disclose the names of beneficiaries and details of purposes for loans amounting to $567,5 million. The loans, known as Contingent Liabilities are advanced to parastatals, local authorities, statutory funds and private companies by external lenders under guarantee from the government.
“The total Contingent Liabilities extracted from returns submitted by line Ministries differed materially from the balance reflected on Treasury return, casting doubt on the reliability of the Summary presented for audit. There was a variance of $90,195, 494 which was not supported by a reconciliation showing the makeup of the difference between the two returns,” reads the report.
“The statement of Contingent Liabilities might have errors and or omissions resulting in its misstatement. The correct position of government’s indebtedness may not be established when records are not compiled,” Chiri said. Advertisement

The Ministry of Finance is required by Public Finance Management Act to present annual, quarterly and monthly reports on loans and guarantees to Parliament but does not do so.
“There is risk that the financial statements could be misstated if the register is not updated on time and relevant details are left out,” Chiri said.
Further distorting the balance of Contingent Liabilities was the inclusion of called up loans amounting to $778,6 million on the return submitted for audit, she said.