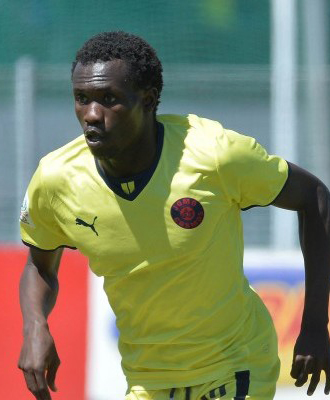 ZIMBABWE international striker, Charlton Mashumba, admits he leaves Jomo Cosmos with a heavy heart after helping the club earn promotion to the Premiership.
The forward was instrumental in Ezenkosi’s successful National First Division season, scoring 19 goals including two in the PSL promotion-relegation playoffs, which they won after seeing-off Moroka Swallows on Wednesday.
Head coach Jomo Sono confirmed earlier this week he expected Mashumba to be plying his trade at another Premiership side or in Europe next season.
Mamelodi Sundowns and Kaizer Chiefs are reportedly leading the race of local sides seeking his signature, while there is also reported interest from clubs in France and Belgium.
“It is going to be sad that I will not be with the team next season but for now I think I will have to sit down with Bra J (Sono) and hear what is on offer,” Mashumba told KickOff.
“However, I think it is sad that I will be leaving this team because they gave me the exposure and opportunity to make a name.
“I would like to be overseas because that is every players’ dream to play in Europe but if things don’t go well with that option then I will be honoured to join any of the teams that finished in the top four PSL teams last season.”Advertisement