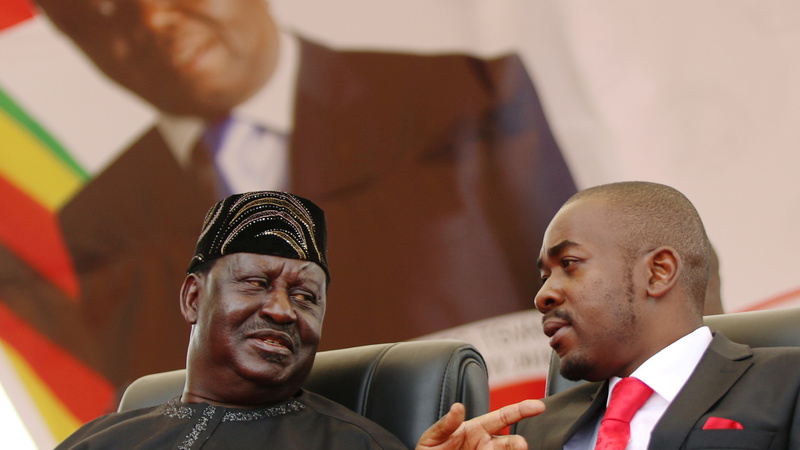 When Nelson Chamisa this week announced his intention to inaugurate himself as “People’s President” of Zimbabwe, he was following in the footsteps of other African opposition leaders — specifically Uganda’s Kizza Besigye and Kenya’s Raila Odinga, both of whom rejected election results and staged their own ceremonial inauguration ceremonies.

This is no coincidence. On the advice of their Kenyan counterparts, Chamisa’s Movement for Democratic Change Alliance consciously modelled its electoral strategy on that of Odinga’s National Super Alliance, according to well-placed sources connected to the party.

Saturday’s planned “inauguration” is a key element of that strategy, designed to force concessions from the new administration of President Emmerson Mnangagwa — who narrowly won the July 30 election — and to shore up Chamisa’s position within his own party.

The links between the Kenyan and Zimbabwean opposition movements are rooted in the friendship between Odinga and the late Morgan Tsvangirai, the veteran leader who founded the MDC. “Raila’s links with Tsvangirai are very close, they were good friends, and they were good friends even before Tsvangirai became very well known,” said Salim Lone, Odinga’s spokesperson.
Odinga attended Tsvangirai’s funeral in February. There, he pulled aside Tsvangirai’s heir-apparent — the youthful, charismatic Nelson Chamisa, who was then fighting to shore up his control of the party. “At the funeral of Morgan Tsvangirai, Odinga did attend and he gave Nelson some pointed council, some pointed advice, things to look out for. Odinga didn’t go through the play by play, but his people went through the play by play later,” said a senior MDC official, speaking on condition of anonymity.

Odinga told Chamisa to watch out for the impact of foreign consulting firms like Cambridge Analytica, which was exposed just a month later for deploying dirty tactics to manipulate the results of elections around the world; and to pay close attention to irregularities in the voters roll. Odinga’s advisers also told the MDC how to prepare for a legal challenge to the election results, including technical details on how to analyse the results.

The two campaigns even shared at least one staff member: Kenyan economics professor Edgar Otumba. Otumba’s job was to run the numbers once the election results came in, and identify where and how they had been manipulated. In Kenya, his findings contributed to NASA’s successful court challenge to have the August 8 presidential results set aside, forcing a rerun.

Otumba confirmed that the MDC deliberately modelled its electoral strategy on the Kenyan example. “True, and they did it very well,” he said. The two countries have a lot in common he said: “…the electoral systems are also similar, and that’s why I was able to analyse election results for both the NASA case in Kenya and the MDC Alliance in Zimbabwe.”

In Zimbabwe, the MDC’s legal challenge failed. The party blames a biased judiciary. But outside the courts, Nelson Chamisa and his team were already executing another element of the Odinga plan. “The Odinga strategy was declare victory and don’t stop declaring victory. If you declare and declare early, you set the system in panic, and you just keep declaring victory,” said the senior MDC official.

On August 1, the day before the official results, Chamisa took to Twitter to do just that: “THANK YOU ZIMBABWE,” he tweeted. “We have won the popular vote. You voted for total Change in this past election! We have won this one together. No amount of results manipulation will alter your WILL.”

Sure enough, the system panicked — but with fatal consequences. Later that afternoon, inspired by the messages coming from party headquarters, a crowd of angry MDC supporters gathered in central Harare to protest against alleged vote rigging. The army responded in brutal fashion, using tear gas and live ammunition to disperse the crowd. Six people were killed.

Chamisa’s latest gambit, the “inauguration” on Saturday, is another tactic ripped straight from the Odinga playbook — although Chamisa is very much making his own decisions, insists his spokesperson.

“The president has his own thoughts. The president speaks to quite a lot of people, and he will have spoken to many leaders in Africa, and I do not doubt that it is possible that he spoke to Raila Odinga, but that doesn’t mean he followed that advice,” said Nkululeko Sibanda.

Like Chamisa’s early declaration of victory, this “inauguration” also carries with it the threat of violence. Zimbabwe’s justice minister Ziyambi Ziyambi has already described the planned gathering as “illegal” and threatened to arrest Chamisa if its goes ahead.

“We hope that this government does not revert to unnecessary violence as we experienced on the first of August, [but] we think they may in fact be planning another round of violence,” said Sibanda.

Regardless, the MDC is pushing ahead. “I think it is very likely that a resolution will be passed declaring Chamisa the legitimate president of the country,” Sibanda added.
According to MDC sources, the mock inauguration achieves two complementary aims. First, it cements Chamisa’s position as leader of the party. The succession from Tsvangirai to Chamisa was bitter and created deep divisions within the party, and several rivals are mulling a leadership challenge at the next party congress.

Any such challenge would be inconceivable if the party has named Chamisa as the legitimate president of Zimbabwe, however.

Second, it keeps the MDC and Chamisa in the national conversation, and might force President Mnangagwa to the negotiating table. With an eye already on the 2023 election, the MDC wants concrete promises of electoral and economic reform before it agrees to work with the current administration; with this in mind, the ‘inauguration’ is designed to show both Zanu-PF and the international community that the Zanu-PF cannot govern alone.

It helps that the MDC is particularly strong in Zimbabwe’s cities, and – crucially – its supporters make up the bulk of Zimbabwe’s tax base.

That’s the plan, anyway. But plans don’t always work out the way they are supposed to. Once again, the Kenyan model is instructive — but this time as a cautionary tale. As Odinga’s spokesperson Lone warns: “Raila agreed to a symbolic inauguration and we saw the limited impact that had. It’s main impact was that it gave a number of supporters of his movement something to hold on to.

But materially it did not change anything. He did not suddenly have more powers. He did not control the military, the police, the treasury, etc. And the enormous pressure on him, not only from the killings that were continuing by police but from the west, was something to behold. It was absolutely huge.”

Odinga has subsequently reached a rapprochement with President Uhuru Kenyatta, his main rival, symbolised by the famous “handshake” the pair shared. But in the process he has divided the party and alienated parts of his base — potentially jeopardising his party’s chances in the next election.

As much as Chamisa is following in Odinga’s footsteps, his supporters must hope that he also knows when to strike out on his own path.