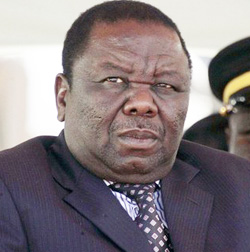 WHEN Zimbabweans marched against President Robert Mugabe in the midst of the army’s soft coup, they were mostly members of the Movement for Democratic Change (MDC). But the reason the opposition will fail to even come close to winning the 2018 elections is that it has no effective leadership.
Never has such a broad mass looked so splintered, fractious or visionless. It has lost its golden moment to rise to the occasion and present Zimbabweans with a vision for a better future, and a plan of how to get there.
If anything, the internal power struggles within the three groups have left what could have been an opposition juggernaut rudderless.
There is the MDC Alliance, which is tenuously held together by Morgan Tsvangirai whose health is failing him, Joice Mujuru’s Peoples’ Rainbow Coalition, and the Coalition of Democrats (Code).
While the opposition has massive latent support, it has no money. Unlike Zanu-PF, the opposition does not have access to state resources and campaigns simply can’t be run merely on democratic principles.
It is said most MDC officials are working for free. The party is so broke that the furniture in its headquarters was allegedly removed by the sheriff as it can’t even afford to pay for it. The MDC is owed money by parliament, but due to the cash shortage in the country, it never even received its allowance.
That explains why senior members such as Welshman Ncube and Tendai Biti have been in the US this week. Fund-raising would certainly have been on their priority list, as well as meeting human rights groups.
But the fact that the MDC Alliance felt that it had nowhere else to turn other than to seek funding from the US, will play into the propaganda of the ruling party that the MDC is a proxy for western powers.
This was the view of Thabo Mbeki and his administration, opting for quiet diplomacy in the face Zanu-PF’s oppression of the opposition, and curtailing of political and human rights.
The result of this approach was that Zanu-PF felt no tangible pressure from South Africa to curb its human rights abuses or authoritarian impulses. It was only Bostwana’s President Ian Khama from the region who did not view Zimbabwe’s opposition movement through that prism.Advertisement

Today, the media in Zimbabwe which serve as Zanu-PF’s mouthpiece – such as the Herald newspaper which has towed the party line for 37 years – is using the MDC Alliance’s fundraising efforts against it. The visit by Biti and Ncube to the US is being painted as proof of their western agenda, and at the end of the day was likely a strategic mistake by a party that needs funds too desperately.
Even if the political opposition had managed to forge a united front with a view to effectively fighting the 2018 elections, it would not have real access to the country’s media.
The reality is that there are no independent or privately-owned radio and television stations, and only a few independent newspapers exist. The Zimbabwean Broadcasting Corporation only has one channel, and radio stations have to get a licence from Zanu-PF controlled authorities.
The result is that Zanu-PF continues to control the narrative, and for those in the rural areas there is almost no access to information other than what Zanu-PF puts out.
London-based Zimbabwean billionaire Strive Masiyiwa will slowly start to change that with the entry of his Kwese TV into its pay television market, but only a tiny fraction of Zimbabwean society will afford to view it.
Most importantly, the opposition is fundamentally disadvantaged by its own leadership crisis. In order to win the 2018 elections, it is estimated it would need to attract around 900 000 new voters, but the opposition is doing nothing at all to inspire them.
It is the same old faces that will lead the campaign, and there is no formidable team of politicians and experienced technocrats behind Tsvangirai. Given his precarious health situation, it is also highly unlikely that he will manage the rigours of a campaign, and there is no contingency plan for what then.
Were Tsvangirai to step down, the prognosis is that the MDC Alliance would split even further, and it would be hard for the MDC-T to stay together.
At a time when the ruling party is experiencing a triumphant moment having removed Mugabe from the scene, and has consolidated its internal power structures at Friday’s Zanu-PF conference, the opposition is looking weaker than ever. It can no longer play by the old rules – it needs to reinvent itself.
* Shannon Ebrahim is Independent Media’s Foreign Editor.