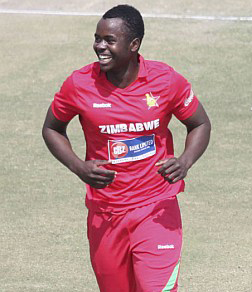 BATSMAN Vusi Sibanda and left-arm seamer Brian Vitori return to the Zimbabwe squad for the four T20Is against Bangladesh starting on January 15.

Sean Williams, who was ruled out of Zimbabwe’s ongoing Twenty20 series against Afghanistan with a groin injury, is also part of the 16-man side.
Tinashe Panyangara and Craig Ervine were notable exceptions, although reports suggested Ervine had caught the flu after scoring 73 in an ODI two weeks ago. Panyangara was picked for the tour of UAE, but has not played a single game so far.
Sibanda had been in terrible form over the past two years. His last fifty in international cricket had come in August 2013, and since then he has averaged 16.34 in 24 matches across formats.
He has not played for Zimbabwe since July 2015, but his recent domestic record shows clear signs of improvement. This past December, he struck back-to-back fifties in List A cricket and racked up three fifty-plus scores in four innings in first-class cricket including 140 and 90 in the same match.
Vitori has spent the same amount of time outside the Zimbabwe team as Sibanda. He comes back as one of four frontline seamers including Neville Madziva, Luke Jongwe and Taurai Muzarabani. Donald Tiripano, who had made his T20I debut a couple of days ago, did not find a place among them.
Graeme Cremer will lead the spin attack along with left-armer Tendai Chisoro and Wellington Masakadza.
Zimbabwe will fly out to Dhaka on January 11, mere hours after wrapping up their limited-overs series against Afghanistan in the UAE.
Zimbabwe squad