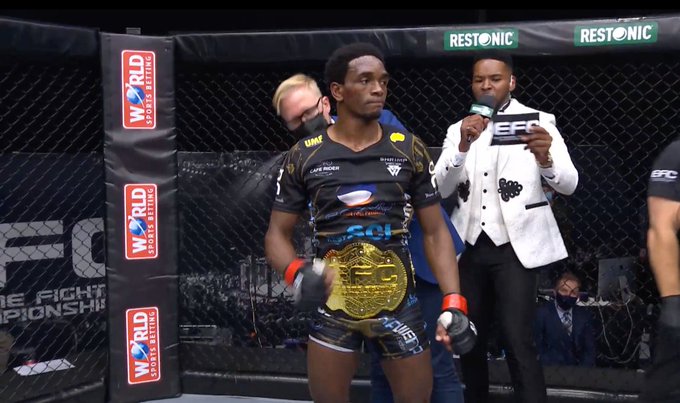 The Gweru-born star dominated the incumbent, Faeez Jacobs for the majority of their five-round fight which ended in a unanimous decision (48-47, 50-45, 49-46) at the EFC Performance Institute in Johannesburg.

The first round saw Sylvester make good inroads with his striking, rocking Faeez for a moment before Faeez landed a more significant blow which dropped Sylvester almost finishing the fight.

However, the Zimbabwean handled the pressure well as Faeez tried to finish the job while the contender showed composure on his back, subduing any threats.

The second, third, fourth, and fifth rounds saw Sylvester slowly gain ascendancy with no intention of stopping as he controlled the exchanges and range with takedown after takedown and superior grappling.

Chipfumbu becomes the second Zimbabwean after Themba Gorimbo to win an EFC world title, and now hopes to move up to the more lucrative Ultimate Fighting Championship (UFC) which is based in Las Vegas, Nevada in the US.

Reigning Zimbabwe Sportsperson of the Year Gorimbo, who was in Chipfumbu’s corner during his win Saturday is the current EFC welterweight champion and is on the verge of taking the next step up to the greatest mixed martial arts (MMA) stage, the UFC.