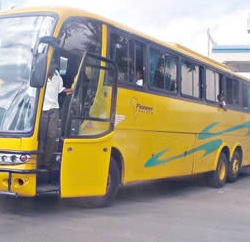 TRANSPORT and logistics group Unifreight Africa, formerly Pioneer Corporation Africa, has embarked on a retrenchment exercise targeting an undisclosed number of workers across its divisions countrywide, it has emerged.
Employees told The Source on Thursday that they had been served with termination letters and were told to accept the terms and conditions on offer or forfeit their terminal benefits.
“We don’t even know what is going on with the company. They don’t want to consult us or negotiate with us over the matter.
“They even refused to talk to the workers’ committee,” said one of the workers who spoke on condition of anonymity.
Workers at the Bulawayo branch said several employees have been laid off, including the human resources manager.
According to a termination letter signed by group’s chief financial director, Shane Beamish, and seen by The Source, the workers were asked to stop reporting to work as from Wednesday, June 3.
“We refer to the provision which relates to termination of contract on notice as provided for in terms of Section 12 (4) of the Labour Act 28: 01 which provides that either party has a right to terminate employment by giving three months’ notice effective 3 June 2015,” reads part of the notice.
“In lieu of you serving notice, the employer shall pay you the equivalent of three months’ salary. Hence, you are not required to report to work with effect from 3 June, 2015. Any terminal benefits, if any, shall be calculated and paid accordingly.”
Regional manager Reginald Mukanya refused to comment on the matter and directed all the questions to the managing director Rob Kuipers, who could not be reached.
The group recently revealed it had completed its restructuring exercise and would now focus on local transport and revised assembly entities.
Last year it closed its Botswana subsidiary and is disposing of Pioneer Transport to employees through a management takeover.
Pioneer Coaches, a division of Pioneer Transport started trading separately from the group in January and is waiting for a potential buyer.
Unifreight’s local operations include Swift Transport, Bulwark, Unifreight Engineering & Heavy Haulage, Skynet and Tredcor Zimbabwe trading as Trentyre.
Revenue for continuing operations stood at $29 million for the year ended December 31 from $3 million in the prior year.Advertisement