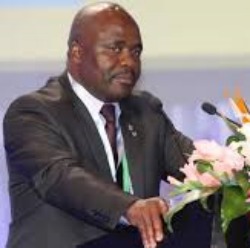 A PLATFORM that seeks to exponentially transform the leadership of industry and commerce across Africa and usher in responsible but aggressive private sector entrepreneurship has been launched.
The platform is for CEOs, directors of businesses and other organisations that are key stakeholders in the socio- economic development of countries. They are expected to meet in the resort town of Victoria Falls the first week of next month under the CEO Africa Round Table banner.
CEO Africa Round Table board chairperson, Oswell Bimha, said CEOs are integral in operations of companies and quasi government institutions, which makes their positioning in economic development strategic.
“The Round Table, therefore, saves to empower them with a wide range of packages, skills and knowledge including researched data, synergies, investment facilitation, business and investment profiling,” said Bimha at a media brief in Harare Friday.
He added, “It is important that business and political leaders across the continent do find a common platform for collectivism towards economic and human development.
“The key focus for the CEO Africa Round Table is to engender long term economic planning towards co-ordination and harmonisation underpinned by a clear vision and development plan.
“The integrated approach helps nations in allocation of resources towards implementation of the multi-sectoral strategies and setting in motion a series of mutually supporting activities in different sectors with the general objective of delivering economic development, poverty alleviation and creation of integrated communities’ in line with a common national, regional and continental vision.”
Bimha also said Zimbabwe was slowly emerging from its economic crisis, albeit at a very slow pace characterised by other menacing macro-economic challenges.
“The current malaise of the Zimbabwean economy is a story of high economic potential that has been wasted,” he said.
“Over the last decade, its performance has trailed behind that of Zambia and other regional countries; Zimbabwe is trapped in a vicious circle that links sluggish growth with high public debt, fiscal tightness and difficult credit conditions,” he added.
“The crisis is, therefore, not only a matter of public finances, it has spilled from the macro level to the micro level, affecting firms and households.”Advertisement

Whilst a number of structural reforms have been muted in the 2018 national budget, according to Bimha, they need to be supported by short-term measures aimed at boosting growth, creating new jobs and increasing credit provision supported by not only well defined and explicit national brand but a long-term national economic vision – agenda 2040.
“The country has persistently suffered from shortemism, planning horizons of at the very best 5 years.
“It is necessary for the CEO to make a critical contribution in propagating for the agenda 2040 as a bare minimum condition for organised economic development in the country,” said Bimha.
Zimbabwe has gone through turbulent times over the last two decades. Nevertheless, things have recently changed and there is renewed hope ushering in a unique opportunity for regrowth.