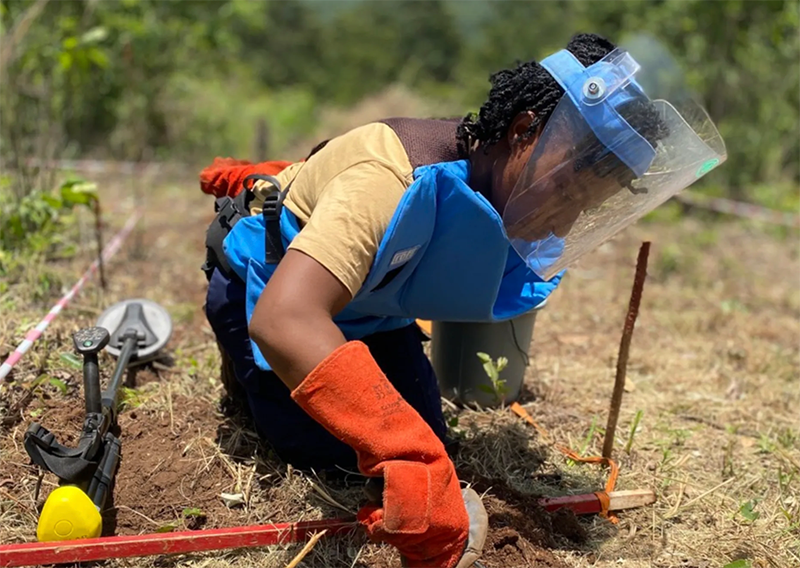 CHIPINGE: When Zimbabwean deminer Memory Mutepfa digs up a landmine, places it in a pit and blows it up using electronic detonators, she feels pride, not fear.

Mutepfa, 31, belongs to a group of women working to clear mines in eastern Zimbabwe, where the country’s former British colonial rulers laid millions of anti-personnel landmines during the 1970s Liberation War.

A veteran of Zimbabwe’s women deminers, who are employed by the Norwegian People’s Aid (NPA) humanitarian group, Mutepfa used to lead a team of 10 and she is passionate about the programme.

“On a daily basis, we used electronic detonators to destroy the landmines without fear. We excelled in the landmines clearing industry as an all-female team just like our male counterparts,” Mutepfa said as she took a break from clearing mines in a tea-growing area near the border with Mozambique.

Zimbabwe gained its independence in 1980 but the anti-personal mines have continued to cause havoc in the four decades since the Liberation War.

About 1,500 people have been injured or killed by landmines since independence, according to the U.S. Embassy in the capital, Harare.

People in places such as Chipinge, where Mutepfa and about two dozen other women were working to clear mines one morning in December, are unable to use mine-contaminated land for agriculture or to graze livestock.

For the women themselves, the work is a source of pride and economic independence that allows them to challenge deep-rooted patriarchal notions in Zimbabwe about the kind of jobs women should do.

“I support my husband. I look after our sons and I have an extended family that I support as well by buying them food and clothes,” said the team leader in Chipinge, Moreblessing Makukunzva, kitted out in a flak jacket, heavy gloves and a protective visor.

“I’m a breadwinner,” Makukunzva, 35, who joined the NPA programme in 2013 after serving in the Zimbabwean army, told the Thomson Reuters Foundation.

The NPA has been clearing landmines in Zimbabwe for the past decade.

As of November this year, a total of 1,322 landmines were removed in Chipinge while a total of 5 million square metres (54 million square feet) of landmine-affected land was released for productive use, according to NPA statistics.

Staff receive attractive salaries and other benefits, such as help to study, maternity leave and the right to switch to lighter duties if they are pregnant.

Mutepfa, who joined the team when she was 21, is close to finishing a degree in development studies and has been paying her own fees for the past four years.

“I’m independent. I don’t have to rely on my husband. I have properties including a house and a car in my name. This is women’s empowerment,” she said.

While not all the NPA deminers are women, the presence of female team leaders and all-women teams challenges traditional gender roles.

The deminers work on often-remote and rugged terrain from 4 a.m. to midday for 22 days a month in the camp and spend the remaining days at home with their families.

“Because we spend more time away from home, some of the women have had their husbands break up with them,” said Mutepfa.

“Others face abuse after confronting their cheating husbands who take advantage of their absence.”

All of the deminers undergo first aid instruction on how to respond to a landmine injury, though accidents are rare, said Rutendo Chitungo, the medic who provides training and is on hand for emergencies.

“I’m yet to attend to an emergency here. But I’m always ready,” said Chitungo, who joined the NPA programme in 2019.

Makukunzva said her dream was for more women to enter the profession, which remains dominated by men in Zimbabwe and elsewhere.

“I will keep on supporting and fighting for more women to take up demining roles and even management posts,” she said.