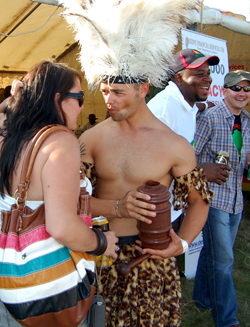 ZIMFEST London, the popular southern African music, sport and culture showcase, returns even bigger this summer after teaming up with the Kiwi and Aussie festival, Homelanz.
The all-day fete has been pencilled in for Saturday 10th of August at Boston Manor Park in West London where a diverse line-up of acts from the four countries – Australia, South Africa, New Zealand and Zimbabwe – will share three stages and a DJ arena as some of the best entertainers from the southern hemisphere come together for the first time.
Speaking about the collaboration Zimfest Director Hilton Mendelsohn said: “This is one dream we have had for a long time which has come true. We are very excited.
“Our communities share a wide range of cultural similarities through a love for music, sport and art. We are looking forward to a day of fun and kicking back in the summer sun, and of course throwing a few steaks on a braai!”
“We are just bringing together some good people, as a good host would do for a BBQ afternoon back home. That’s the feel we are going for,” he continued.
Hilton added: “Expanding the network provides a unique opportunity for us as Zimfest to share the things we love about Africa; and the Homelanz crowd to share the things they love about New Zealand and Oz; and everyone is invited to spend the day with us, it’s really going to be something!”
The event will see four headline acts, one from each country with Australia represented by reggae band Blue King Brown, New Zealand by Tahuna Breaks, South Africa by Desmond and the Tutus and Zimbabwe by soul singer Thabo Mkwananzi and his band, The Real Deal.
Other notable acts include New Zealand rockers I Am Giant, UK-based South African group What Now and a special DJ set by Zimbabwean award-winning producer, Rymez.
Tickets to Zimfest/Homelanz Festival can be purchased at http://www.zimfestlive.com/tickets/ and the event welcomes all to celebrate Zimbabwe and Africa in the heart of the UK.