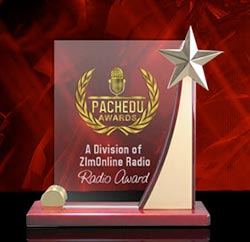 ONE of Zimbabwe’s leading internet radio stations ZimOnline Radio has just announced the results of their internal honour awards for their global fan base, marking the 2nd year the awards have been running.
The awards traditionally coincided with the anniversary of the Radio Station’s which, this year, celebrates its fifth birthday.
The thirteen online-voted categories which varied from Listener of the Year to Supporting Organisation of the year were complimented by the Station Honour Award which this year was given to among other, Nigel Chanakira the former Kingdom Bank Zimbabwe founding head and an inspiration to many Zimbabwean business aspirants and success stories.
“Nigel Chanakira is not only a mentor and inspiration to many Zimbabweans who decide to embark into the business world, but also to myself as I have from time to time benefited immensely from his practical journals, advice and testimonies.
“I am humbled at his acceptance of this token of gratitude from the entire team,” said Simbarashe Nyanhanga, ZimOnline Radio head.
The station’s efforts have been recognised and acknowledged extensively within the Zimbabwean community and the United Kingdom where it was launched after being nominated by four different Awards by ZIMAA, ZimAchivers, BEFFTAs & the British National Diversity Awards, winning at least a single one each year.
“Our job is to promote, celebrate and preserve the Zimbabwean art & culture, be a centre mouthpiece for the Zimbabwean talent globally,” said Pretoria based Milicent Chanetsa who is the Station Chief Operating Officer.
“While we have been recognised, we remain prudent that we still have a lot of work to unite the Zimbabwean community for the greater good and by thus a gesture, we pay a token to our share of the task
“I humbly take this opportunity to congratulate all nominees and winners who were incepted in the Pachedu Awards Class of 2013, thank the team behind the scenes and our sponsors and underline that it is you who make us a Premier Radio Station.”
ZimOnline Radio can be tuned in via their website link www.zimonlineradio.com, tune in platform and are also on a mobile application available from GooglePlay, iTunes & Kindle.
Alternatively, you may catch up with archived Radio programmes on Soundcloud or contact the station via all social network media.Advertisement