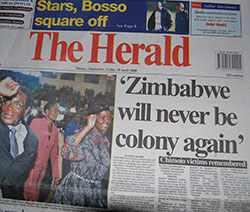 WHAT started as a light-hearted post on social media by Herald Political Reporter Tichaona Zindoga about an H-Metro bill board headlined ‘Snake Swallows Two Rabbits’ turned nasty when Zimpapers’ reporters from the two sister publications tore into each other over previous stories.
H-Metro is the Zimpapers stable’s daily tabloid.
First to comment was evergreen socialite Nomathemba Primerose Ndebele who expressed astonishment at the fact “people still do get paid after such pathetic headlines”.
After that, journalists from other Zimpapers stables, The Herald and Sunday Mail joined in with Mail Leisure Editor Garaika Mazara mocking the tabloid saying “H-Metro is the English version of Kwayedza”.
He was followed by Herald Lifestyle Editor Monica Zodwa Cheru who poured paraffin on the burning fire with her headline, “Person seen walking on two legs”.
Makumire Esau then asked Tichaona Zindoga whether he thinks right-minded Zimbabweans still believe in his sanctions articles.
H-Metro Deputy Editor Charles Mushinga then joined in saying he always laughs at ‘Mickey Mouse’ Herald stories.
“I am talking about the Zimpapers people who commented here and I always walk to your desks and tell you face-to-face Jonathan Mbiriyamveka, Tafadzwa Zimoyo and many others.
“I have seen laughable things in every newspaper in Zimbabwe but never laughed at it on social media. Maybe I’m a chicken but it just spells lack of professionalism to me.
“I have never seen even the outspoken Murape Murape saying that Bosso player is awful but there are always new lows. I am not even offended; just surprised.”
Mushinga later defended the story and the headline.
“The headline, it does look ludicrous at a glance I agree. But every paper has fillers and this was not even a bad filler,” he said.
“Had the story been about the snake swallowing the rabbits, I would be apologetic but here was a good social story, at least in my opinion, about a python that was caught in someone’s home with the two rabbits and it was captured by a resident who took it to the police.”
But H-Metro News Editor Tatenda Chipungudzanye saved the worst for last when he criticised Herald Senior Reporters for their pathetic reporting and cooked up newsroom stories.
“It’s amazing that you go crazy about a mere billboard, the paper sold on the streets more attractive stories and you can ask the vendors who matters more than you guys. We react to the market and worry less about jealous colleagues.Advertisement

“It is equally amazing that the people posting comments here have committed worse crimes, especially the Herald Entertainment Desk, Jonathan Mbiriyambveka.
“Almost every story that you write leaves a lot to be desired, we have not gone to town about your story on Jah Prayzah. You claim Jah Prayzah won an award for the song YET records show that, what won was the video and the winner was Slimaz. (Videos have nothing to do with ownership of song).
“The list goes on – Magaya solemnises wedding (which was a lie and wrong – you clearly cooked quotes), Miniehle heavily pregnant (hasn’t given birth 2 years later), Malaika nude pictures (clearly not nude and still failing to realise that it’s also a crime to possess nude pictures), Seh Calaz skinned alive, Mukanya wants to meet President (you created your own Mukanya manager) … the list is endless.
“Lisa Morgan’s relatives had to drive all the way from GWERU to complain about your story some 10 years back.”
Chipungudzanye added: “Sophie Chese – being GREEN you always come to our newsroom looking for diaries.
“Une mukaka pamhuno! Why do you come kuvanhu vanopererwa looking for diaries?
“The other day in the stable you told the whole nation that ‘TONGAI MOYO THRILLED FANS AT GWERU GALA’ when he was on deathbed (ndiyo journalism yachoka iyi).
“Tafadzwa Zimoyo, rather than taking your considerable time posting pictures on Facebook, we have never seen any VALUE ADDITION at The Herald there. Icho!!!”
As the exchanges continued, Tendai Rupapa, Herald Senior Court Reporter, pleaded for peace among her fellow reporters.
Journalist from other media houses later joined in to cool off the tempers by encouraging rivals to respect each other and accept positive criticisms.
Tichaona Zindoga later apologised but still with some sarcasm.
“I’m really sorry for all that got the not-so-friendly fire in the H Metro Snake-swallow-two-rabbits saga including sekuru vangu Tafadzwa Zimoyo and young Sophie Shese”.
“Isu tajaira coz we fight bigger battles nema Brish** maAmeric**** anaChamatama Morgan Tsvangiari on your behalf makati ziii”.