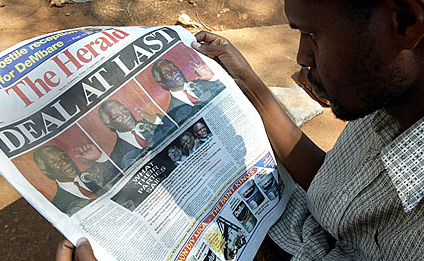 ZIMBABWE’S largest media house, Zimpapers narrowed its loss for the half-year ended June 30 to $20,000 from $1,4 million, as advertising revenue and sales plunged while finance costs remained high and the economic environment worsened, the company said on Friday.
Zimpapers operates 12 publications, a commercial printing press, a radio station and two digital platforms.
Revenue came in at nearly $20 million, lower than the $21 million from the same period last year as newspaper sales and advertising income dropped.
“The difficult economic climate has negatively affected consumers’ disposable income,” said chairman Delma Lupepe in a statement on Friday.
“This, together with the growth of digital platforms and free online content, has negatively impacted on print circulations, resulting in other media houses either shutting down, or stopping publishing their non-performing newspaper titles.”
Lupepe said the group had instituted cost containment measures that resulted in an operating profit of $1,8 million compared to a $1 million operating loss previously. Finance costs stood at $700,000 for the period.
The newspaper division posted a $1,4 million profit before finance costs, while commercial printing division narrowed its loss before costs to $120,000 from a $710,000 loss in the prior period.
Its broadcast arm recovered from a $300,000 loss before finance charges to a profit of $200,000.
The group expects to launch its regional Diamond FM radio station for Mutare in the east of the country in the second half of the year.Advertisement