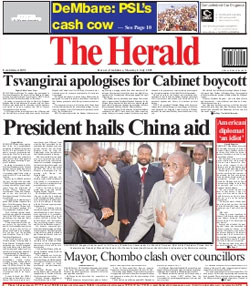 Listed media group, Zimpapers on Friday reported a net profit growth of 93 percent to $1 million for the six months to June from $570,520 recorded in the same period last year despite a fall in revenue.
Revenue dropped 4 percent to $18,3 million from $19 million in the prior comparable period.
Newspaper, commercial printing and broadcasting divisions contributed 12 percent, 13 percent and 22 percent respectively to total revenue.
“The four percent drop in revenue was caused by the reduction in circulation volumes, mainly as a result of liquidity constraints arising from cash shortages,” said chairman, Delma Lupepe in a statement.
Finance costs fell from $571,380 to $280,123 while operating costs increased from $11,2 million last year to $12 million .
“The company’s operating costs increased as the company took a deliberate approach to increase investments in new products including digital, The Business Weekly and Zimpapers Television Network production house during the period under review for future revenue growth,” said Lupepe.
The company’s debtor book went up by 7 percent to $11, 1 million.
Total assets increased marginally to $39,7 million from $39,6 million last year.
Cash from operations was down at $2, 1 million compared to $3,8 million recorded in the same period last year.
The group did not declare a dividend, citing the need to, “preserve the available resources for working capital, liquidating the legacy statutory liabilities and debt as well as completing the ongoing recapitalisation programme to ensure a brighter future.”Advertisement