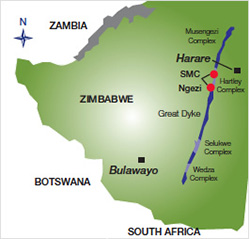 ZIMBABWE’S largest platinum mining company, Zimplats, is building a $131 million base metal refinery at its Selous base, a senior official said Friday.
Acting chief executive, Stanley Segula, told parliamentarians visiting the company that $20 million has so far been invested in the project which is expected to create significant new employment opportunities for Mashonaland West province.
According to the senior officials, the company currently employs about 5,800 workers, some 3,200 of them making up the permanent establishment.
“Our metal accounting is very strong and meets international standards but we haven’t been able to process our platinum locally,” said Segula.
“We have been exporting to South Africa all along but now we are setting up a base metal refinery plant which will be the country’s first.
“We have engaged about 300 contractors on this project, so this is definitely going create employment for local people as well as local experts.”
Zimplats head of corporate affairs, Busi Chindove, said the company expects to commission the plant next year.
Segula told the legislators that Zimplats was also targeting to invest $30million in upgrading the Selous–Ngezi road as part of their corporate social responsibility programme.
Beneficiating platinum to matte enables producers to realize 88,5% of potential revenue; at base metal refinery stage they get 89,7%, rising to 90% at precious metal stage.
Mines minister Walter Chidhakwa says platinum mining companies should demonstrate tangible progress towards building beneficiation facilities for government to scrap the 15% tax on raw platinum exports.Advertisement