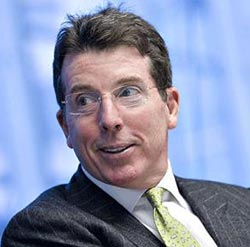 BRAINWORKS Capital Management founder and CEO, George Manyere, has denied claims he demanded a $45 million fee for advisory work on Zimplats’s $971 million indigenisation compliance deal.
Manyere, a member of former Barclays PLC boss Bob Diamond’s “founder network” for his $325m Atlas Mara African investment vehicle, has faced claims of profiteering on the back of the programme that has seen international businesses obliged to give up control of operations in the country to local businessmen.
Manyere described claims he had demanded a $45m fee from the country’s largest miner, after handling the sale of a majority stake in the company to a group of local businessmen and employees as “completely unfounded”.
The Harare-based investment banker and former World Bank official has worked on the indigenisation programme through his advisory and investment firm, Brainworks Capital Management, which was hired by the government to oversee the scheme.
Local press reports have claimed Manyere demanded the fee from Zimplats, which was controlled by South Africa-based mining company Impala Platinum (Implats), as part of the sale of a 51pc holding in the business for $971m.
“When there is a major deal in a small economy like Zimbabwe, you have some people getting jealous. But it [reports of his fees] is incorrect, when we finish we will get paid,” Manyere told The Sunday Telegraph.
“It is the political environment we are in. [If] where you do something is key to the economy you get a group that is not involved which will make noise.”
Manyere said he was not “hungry for money”; he just wanted a good deal for Africa.
Following the deal, the Zimbabwean government separately said it would “acquire compulsorily” 28,000 hectares owned by Zimplats, around half of the company’s mining land.
The deal and the land acquisition is under review by new indigenisation minister Francis Nhema, after President Robert Mugabe said in March that he did not think the country should repay the loan – which Implats is providing as vendor finance – for the Zimplats stake.
Atlas Mara’s prospectus produced for investors says that Africa’s economic empowerment legislation is one of the risk factors for the venture.
Manyere is one of four local financiers hired by Diamond, the former chief executive of Barclays, as he looks to buy an African financial services business after raising $321m this month through the London listing of Atlas Mara.Advertisement

The former banking head has launched Atlas Mara in partnership with the 32-year-old Ugandan billionaire, Ashish Thakkar, who runs his $1bn Mara Group in 19 African countries. The cash shell will target acquisitions of financial services companies across Africa.
The involvement of Manyere could raise questions about the fund’s potential links to controversial regimes such as that of Mugabe.
A spokesman for Atlas Mara said: “The company has relationships with a number of advisors across Africa who they may call upon to assist in the sourcing of an acquisition.
“George Manyere and all the advisors have excellent, relevant experience and we look forward to the opportunity of working with them.”