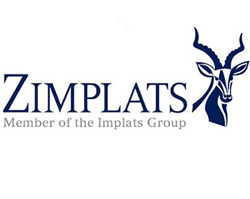 IMPALA Platinum (Implats) said mill throughput at its Zimbabwe mine Zimplats fell 13 percent to 1,32 million tonnes in the first quarter to September compared to 1, 51 million tonnes in the corresponding year.
This was after the closure of Bimha Mine, its largest underground operation following a ground collapse in August which was expected to cost the company 70,000 platinum ounces worth about $100 million.
However, the increase in production under its Phase 2 expansion project which is scheduled to reach full production during the second half of the financial year, means the company will only lose 30,000oz of output instead.
Implats, the world’s second largest platinum producer, on Wednesday said platinum in matte for the first quarter fell 13 percent or 8,000 ounces to 52,000oz.
“Six out of the eight mining crews and their fleets at the Bimha Mine have been successfully redeployed at other mining operations to mitigate the production impact.
“Together with the  ramp-up of the Phase 2 expansion project … platinum production is now only expected to be negatively impacted by  30 000 platinum ounces compared to the original guidance of 70 000 ounces for the financial year,” the company said.
The re-engineering of mining operations and further production mitigation measures at the Bimha Mine were ongoing, it added.
Ore milled at Mimosa Mine, a joint 50:50 percent mine between the Implats and Aquarius Mining, increased by four percent to 636,000 tonnes, compared to 611,000 tonnes in the prior corresponding period.
“The increased throughput, together with improved recoveries at the mine improved platinum production by 12 percent to 29,000 ounces, compared to 26,000 ounces in the prior corresponding period,” it said.Advertisement