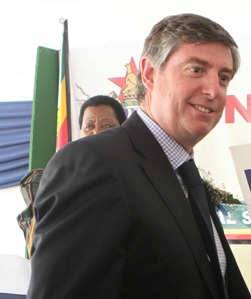 ZIMPLATS on Wednesday said revenue in the quarter to March increased 9 percent to $137,8 million due to improved metal prices but was down 19 percent from the 169.3 million U.S dollars recorded last year.
According to the mine’s quarterly report, tonnes mined increased by one percent from the previous quarter at $1.4 million tonnes mainly due to production ramp-up at Mupfuti Mine.
“Long term stabilisation of the areas affected by Mutambara Shear progressed well in the quarter with the full rehabilitation of the area expected to be completed by the end of the financial year,” reads the report.
Implats which owns 87 percent of Zimplats, signed a preliminary January 2012 deal to sell part of its stake to local investors to meet the statutory indigenization exercise.
The report said, reduced operating costs at $101.7 million saw the group report an increase in operating profit of 76 percent to $36.1 million from $20.5 million in December 2013.
However if compared to March 2013’s $65.4 million the operating line was down 45 percent.
Concentrates stockpiled in the previous quarter following the furnace tap block blow out incident in December 2013 were smelted in the quarter resulting in metal in converter matte produced being 4% above previous quarter despite the throughput from the mills being 3% lower.
Metal recovery rate (4E) at 81,8 percent was marginally higher than the previous quarter’s rate of 81.7 percent while 4E sales were flat at 114 193 ounces.
Cash cost per 4E ounce was one percent higher than the previous quarter at $698, mainly due to the impact of an interim wage increase for National Employment Council (NEC) graded employees and insurance excess on the cost of repairing the furnace following the tap hole blow out incident in December 2013.
Tonnes milled and metal in concentrate were below previous quarter’s performance due to ore shortage arising from the mismatch between mining and milling at a time when the business was operating with minimal run of mine stocks.
Media reports says, Zimplats commenced production at the Ngezi opencast mine in December 2001 after purchasing BHP’s interests in the Hartley Platinum and the Mhondoro Platinum Joint Ventures which included a concentrator and smelter.
In 2010, it began the Ngezi Phase 2 expansion involving the development of a new two million tonne underground mine, an additional concentrator and associated infrastructure at a cost of $460 million.Advertisement

At completion in 2015, it will push Zimplats’ refined platinum production to 270,000 ounces. The project is the second stage in a series of planned expansions to grow the business.

The company initiated the Ngezi Mine and Selous Metallurgical Complex (SMC) project in 2001 and a new concentrator at Ngezi was commissioned in July 2009, reaching a full production capacity of two million tonnes per annum in October 2009.