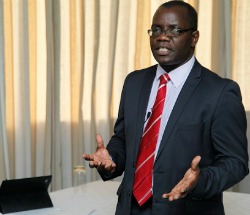 ZIMBABWE stock exchange listed Zimplow Holdings Limited is seating on a debt of about US$12 million, half of which is short term at less than 90 days, the company has revealed.
Group chief executive Zondi Kumwenda said the company was experiencing difficulties with debt collection with the bulk of the debtors mainly with the Farmec and Barzem units.
“It has been extremely difficult to collect debts and I’m sure it’s been a problem for many companies and for us it has been very tough especially with the size of the amount,” he said.
Zimplow managed to report a small profit in the six months to June, mainly boosted by proceeds from the disposal of Puzey & Payne. Kumwenda said the disposal will allow the group to focus more on key sectors of agriculture, mining and infrastructure.
Operating profit was at US$726,388 from revenue of $20.06 million but gains on the disposal of US$1,8 million saw the group report a bottom-line of $1,17 million.
Kumwenda noted that the sales volumes for the company’s mealie brands eased four percent while exports were 25 percent down mainly affected by price competition from the East which remains stiff.
In terms of group operations, CT Bolts volumes for most of the products were down except for HT bolts which were up 6 percent. Kumwenda said the volumes were affected by the tight liquidity.
Barzem trading conditions were severely restricted in May and June due to liquidity challenges while at Farmec volumes were affected by the unavailability of asset based finance.
Going forward, Kumwenda said a lot depended on the outcome of the rainy season and new government policy on agriculture. The group was still pursuing the goal of $100 million turnover by 2015.
Revenue for the period under review was US$20,06 million against US$4,3 million with the bulk of that coming from the domestic market at US$19,2 million against US$3,1 million last year. Exports contributed US$901,222 down from US$1,2 million last year.
Zimplow is yet to go into asset based finance, but was currently in negotiations for a $5 million credit line with Brazil and this should be concluded at the end of the month.
The deal is expected to improve volumes in the tractor division Kumwenda said Tassburg was being sold out and had been shown on the results as available for sale.Advertisement

“The disposal should be completed by September 30