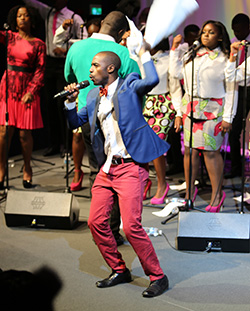 WORLD travelled gospel interdenominational group Zimpraise make their first ever visit to Victoria Falls on Christmas Day for a show dubbed end of year mania.
Organizers of the December 25 show said more than 2 000 people were expected to attend at Elephant Hills Resort for the night.
“It has always been in our culture to celebrate Christmas Day and this time we are coming to Victoria Falls because the resort town has been starved of gospel shows.
“Christmas Day is for ministering and we will be praising with our fans from there as we say goodbye to 2014,” said Zimpraise in a statement on Monday.
The populous seven-year-old group, with a membership of more than 80 individual singers made headlines with the hit song Sungano, which was also used by political parties at their rallies in the run up to last year’s elections.
Advance tickets are going for $10 while fans will fork out $15 at the gate. The show is most likely to attract a full house as it has become the talk of the resort town.
“This is the first time we will be performing in Victoria Falls and we would want to urge our fans to come in numbers as we promise them a memorable show as we end the year,” read a statement from the group.
“The only chairs that will be available in the venue will be for the VIP while the rest of the crowd will be standing as we expect more than 2 000 fans from all over the
country.”
The organizers are still finalizing on the list of the lead singers with 30 having been confirmed so far for the Victoria Falls show.
Zimpraise is a Zimbabwean version of Joyous Celebration of South Africa, another world-acclaimed interdenominational group that also features Zimbabweans.
The group has toured the United Kingdom, United States and United Arab Emirates among other places and will be launching its fifth DVD early next year, to cap an eventful seven-year history in the gospel music field.
It has lined up a number of local and international concerts.Advertisement