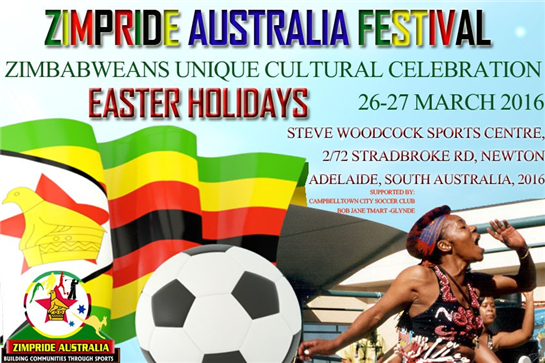 THE Zimpride festival comes alive this month at Steve Woodcock Sports Centre, Newtown, Adelaide in Australia on Ester Saturday and Sunday to help encourage the celebration of Afro-Zimbabwean culture in Australia and New Zealand.
The festival this year marks nine years of what initially started with only two soccer teams at the inaugural event held in Canberra in 2008. This year fifteen soccer teams will compete in a tournament organized as part of the festivities.
Organisers said preparations for the 9th Zimpride Festival hosted by Zimpride Australia Incorporated in conjunction with South Australian Zimbabweans Association (SAZA) are now at an advanced stage.
The festival aims to foster the spirit of togetherness among Zimbabweans and other nationalities by providing a platform for social interaction in a bid to maintain good physical and mental health.
The Easter Weekend’s event is dubbed “ZIMPRIDE”, a celebration of Zimbabwean-African culture by Zimbabwean communities in Australia and New Zealand with the main activity being soccer matches.
Organising committee’s media officer Polite Moyo said he is upbeat about the festival and hopes Zimbabweans across the country will come together to “network, socialise, unite and showcase their unique culture and talent”.
“Few people know anything about our country’s culture, hence I invite everyone to come and witness Zimbabwean culture on display during this year’s festival.
“We have many activities lined up for families and kids that celebrate our unique culture, food, music and heritage,” said Moyo.
An after-party spiced-up with live performances from international musicians from Zimbabwe will keep festival buffs entertained.
In 2015, the festival attracted more 1,000 enthusiasts from around the country.
With the festival being held during the Easter Holidays annually, it has become a great get-together event for Zimbabweans across Australia.
For details visit www.zimprideaustralia.com.au. Facebook – Zimpride Australia Incorporated or Call:  0412 884 640Advertisement