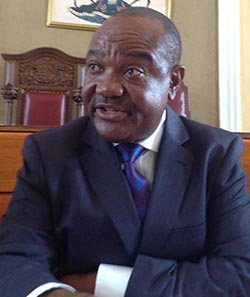 THE Zimbabwe Revenue Authority (Zimra) is set to rake in about $45,000 in taxes every day from a thousand vendors operating in Harare’s central business district.
The Harare City Council, working in conjunction with Zimra, said in a statement that the vendors would begin paying the tax from Monday next week.
Those operating flea markets will pay $2 daily and fruit, vegetable, airtime, newspapers and dried food vendors will pay $1 a day.
“This initiative is a realisation of the critical role played by the informal sector in the national economy,” read the statement.
“Designating and approving convenient vending sites is expected to not only increase revenue collection by the city council, but also bring sanity and orderliness in the city.”
The decision to tax informal traders has however triggered an outcry from the vendors most of whom complain that they are already finding it difficult to keep their heads above the water in a hostile economic environment.
With most companies being forced to shut down as the economy deteriorates, most Zimbabweans are turning to the informal sector to eke a living.
Vendors who spoke to NewZimbabwe.com said they were not happy with the daily tax adding it would have been better if the authorities came up with a once-off paying scheme at the end of the month.
The council however, insists that a once-off payment for the month would “inconvenience those that do not wish to trade daily”.Advertisement