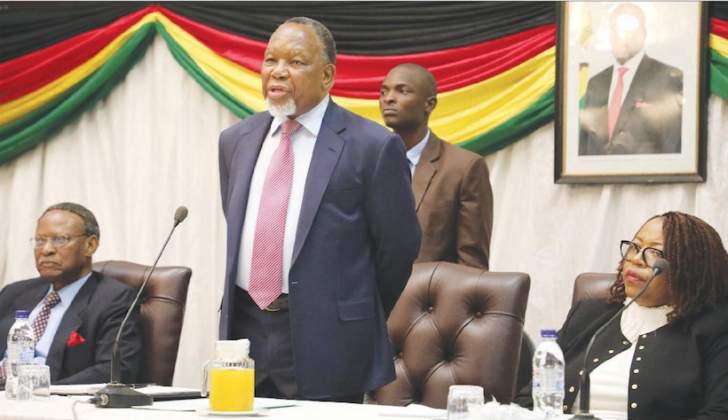 The Motlanthe Commission was a seven-member Commission of Inquiry into post-election violence in Harare 2018.

Seven civilians were gunned down by soldiers who had been deployed into the Harare CBD August 1, 2018 to quell wild protest scenes by sympathisers of the opposition MDC Alliance who were agitated by the slow announcement of poll results amid rigging fears by government opponents.

The Commission recommended, among others, compensation for victims of the atrocities and the bringing to account, members of the country’s security establishment who killed the civilians.

The Commission also urged Zimbabwean authorities to create a platform for political dialogue with political opponents.

But in its report entitled, “The Motlanthe Commission: What’s next for victims”, ZimRights argues none of the recommendations has been implemented yet.

The rights watchdog argues this was sheer waste of taxpayers’ money.

“A year and a half into the commission of inquiry’s findings and recommendations, no justice has been done for the victim and the perpetrators remain at large.

“It leaves in question government’s band-aid intention in establishing and appointing the Commission of inquiry with whom it had no obligation to implement the recommendations,” reads the report.

“The government has not fulfilled the recommendations, instead politicians have sought to use the report more as a public relations document rather than a sincere quest for reform and nation-building.”

The report further points out Mnangagwa has only used the Motlanthe Commission report to gain favour internationally.

Adds the report: “It is important for government to seek dialogue first with its citizens and affected families before parading the report to foreign governments.

“Many believe it was wasted money and time.”

Government on the other hand argues it has fully implemented the recommendations.

Justice Ministry Permanent Secretary Virginia Mabhiza, who was also secretary of the Commission earlier this year, said a few delays were as a result of Covid-19 but everything else had been dealt with.

“We have complied fully with the Motlanthe Commission but some of the processes are still ongoing,” said Mabhiza.

She said compensation of victims had been delayed because they were not forthcoming.

A Political Leaders and Actors Dialogue (POLAD) platform formed to facilitate discussions on key policies by the Mnangagwa administration has been dismissed by main opposition MDC and since failed to have the expected impact.