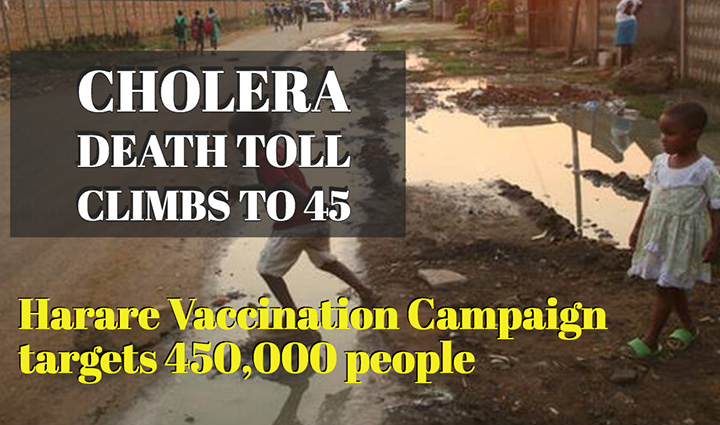 At least 45 people have been killed by cholera in Zimbabwe in the past three weeks, the World Health Organisation (WHO) said Tuesday, describing the strain as “multi-drug resistant”.

It said that an oral vaccine campaign was due to begin shortly with 450,000 people targeted in the worst-affected suburbs of Harare.

About 500,000 doses were due to arrive in the country on Wednesday for Zimbabwe’s first oral vaccine campaign to combat the disease.

“A cumulative total of 6,428 suspected cases, 45 deaths, and 96 confirmed cases have been reported,” said a report by WHO and the health ministry.

Almost all of the deaths have been in Harare, with one in the eastern district of Makoni and another in the central city of Masvingo.

Safe water is being trucked to residents, and police have banned the sale of street food, arresting vendors to try to prevent the epidemic from spreading.

Cholera outbreaks occur frequently in Zimbabwe’s cities, where safe drinking water and sanitation facilities are scarce. In Harare, public gatherings have been banned and people are discouraged from shaking hands.