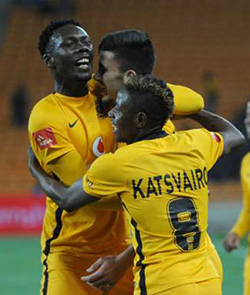 GOALS from Willard Katsande and Michelle Katsvairo spearheaded Kaizer Chiefs to a 2-0 win over Free State Stars at the James Motlatsi Stadium in Orkney on Wednesday evening.
The Zimbabwe duo not only guided the Amakhosi to a third win in succession, but also to the top of the standings. As for Ea Lla Koto, they remain winless after five fixtures.
A mistake by Hendrick Ekstein almost resulted in a goal for the hosts on two minutes as Thokozani Sekotlong took aim at goal; luckilly for the Chiefs midfielder, Itumuleng Khune – in his 250th start for the club – was well positioned to gather the former AmaTuks striker’s resulting shot at goal.
Having survived the early scare, Chiefs hit the front from the penalty spot in the 10th minute of the clash. Joseph Okumu was guilty of fouling Sibusiso Khumalo inside the area and Katsande duly stepped up to fire the ball past Thela Ngobeni.
The setback sparked Ea Lla Koto into life with the Free State club, who were responsible for the first coaching casualty of the season, going close through Bokang Thlone in the 24th minute. However, his shot from an acute angle rattled the side-netting.
Goodman Dlamini then saw his powerful shot fly straight into the grateful hands of the Amakhosi skipper in the 39th minute.
Chiefs, though, ended the half on the front foot with the centre-back pairing Mulomowandau Mathoho and Lorenzo Gordinho going close from a succession of set-pieces.
Gordinho, particularly, was unlucky to see his header attempt fly inches over the crossbar with the final play of the half.
Mathoho had another chance to get his name on the scoresheet in the 58th minute. George Maluleka delivered a pin-point cross onto his teammate’s head, but unfortunately for ‘Tower’, he was unable to guide his attempt on target.
Katsvairo doubled the visitors’ lead in the 64th minute for his first goal in a Kaizer Chiefs jersey. The former Chicken Inn forward smashed home a low shot into the back of the net from an acute angle after being sent through on goal by George Lebese.
Mathoho had a chance to put the game to bed in the 87th minute, but again he failed to capitalise from a set-piece. It mattered little, though, as Chiefs cruised to victory.