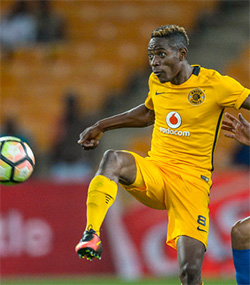 KAIZER Chiefs striker Michelle Katsvairo said he is already feeling like part of the Khosi family after scoring his first goal for the club.
The Zimbabwean made his second league start and fourth appearance last night against Free State Stars and sealed the 2-0 win with a good finish in the 64th minute.
Ramahlwe Mphahlele played the ball from midfield to George Lebese on the edge of the box, and Lebese laid it first-time into the path of Katsvairo, who finished at the neat post via a slight deflection.
Katsvairo said he was grateful for coach Steve Komphela’s motivation as he searched for his first goal.
“Ja, he [the coach] always tells me to push and it’s working now, of course [the understanding between the players at Chiefs is getting better],” he said on SuperSport.
“I would like to thank all the players because they are taking me as a family, so I think it’s the best thing because we are working as a team.
“As a striker my job is to score so I was waiting for it and I would like to thank God for it.”