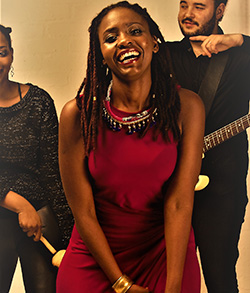 ZIMBABWEAN Mae Sithole is set to serenade her South Africa-based fans at Cape Town’s Alexander Theatre next Saturday.
Prior to recording her first album, First Glance, who recently launched a new track Jailor has worked with a lot of prominent artists, including award-wining music producer, Andrew Baird.
Sithole has also worked with Henry Olonga, Rebekah Matheny (Kenya), Audrey Mbuyazi (South Africa), and Bonnie Deuschle (Zimbabwe).
“Her international multicultural background is the magic that inspires her song writing and performances. Her live performances are always dynamic, colourful and she incorporates the Mbira (thumb piano) in her music,” said Alexander Theatre in a statement.
Her sultry vocals have also featured on a number of jingles for Econet Zimbabwe, and the Kenya Revenue Authority. She has also won lead roles in a variety of plays across the world and was a member of prominent group Chipawo.
Sithole played the lead in the ZBC TV series, Chipo and the Bird, before her family moved to Addis Ababa, Ethiopia. She landed the role of Demekech (Dorothy) in an adaptation of the Wizard of Oz, entitled, The Wizard of Oz Comes to Ethiopia.
In addition, she has performed in a number of musicals including Fiddler on the Roof, and A Christmas Carol.
Advertisement