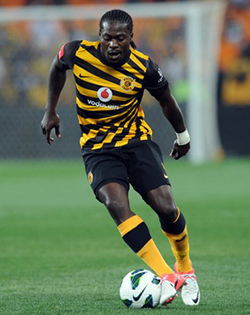 KAIZER Chiefs striker Kingston Nkhatha is eager to test some of their training ground tactics in a match situation when they visit AmaZulu on Wednesday.
The Zimbabwe international has been guilty of poor finishing as he has netted only once in the league, despite being the starting marksman for league-leading Amakhosi in this campaign.
Head coach Stuart Baxter complained about the lack of goals from his strikers after the Telkom Knockout clash against Platinum Stars which went to penalties after a goalless score-line, and Nkhatha agrees that they should be doing better.
“The coach is right. All the strikers have been working hard at training at finishing. By the grace of God, everything will come right on Wednesday evening. As strikers we owe it to the team,” the Warriors striker told his club’s website.
“Playing away against AmaZulu is never easy. Especially after coming from a break. (But) We have been working hard at training to rectify a few problems. Now we have to prove in the forthcoming match that we can apply the lessons learnt.”
Midfielder Reneilwe Letsholonyane is the Soweto giants’ current leading scorer, with five Premiership goals to his name, followed by winger Mandla Masango, who has scored four in the league so far.
FIXTURES
Wednesday: Free State Stars v Polokwane City, University of Pretoria v Ajax Cape Town, Mamelodi Sundowns v Black Aces, Moroka Swallows v Supersport United, Amazulu v Kaizer Chiefs, Maritzburg v  Bloem Celtic, Chippa United v Bidvest Wits.