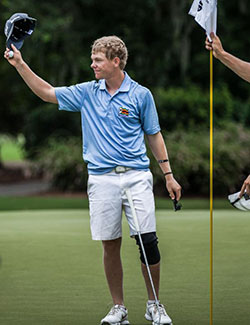 ZIMBABWEAN Scott Vincent won the 15th annual Players Amateur Sunday, beating two rivals by one stroke in a victory that also earned him an exemption into a PGA TOUR golf tournament.
Vincent is the fifth golfer from Zimbabwe to attend Virginia Tech and the only Hokie to be named to the Ping All American Team.
The soon to be senior began Sunday’s round six strokes behind two day leader Ontario’s Garrett Rank who started the day at 13-under par.
“You’re starting the day so many shots back, you never really know what’s going to happen but it’s definitely not in your favour,” Vincent said.
“I knew that, and I knew it was going to take something special or the opposite, where he was going to fall back a bit, which he ended up doing.”
Vincent’s break came at the sixth hole when Rank carded a 4-over-par 8. Vincent birdied the hole and took the lead at 9-under.
Garrett birdied the twelfth hole and regained his share of the lead but Vincent birdied two more times on the back nine and finished with a 68, one stroke ahead of the Canadian.
“I just knew that there were some birdies to be had on those last five holes,” Stewart said.
“That was kind of exciting, just to have a chance. That’s why you come.”
Hunter Stewart shot even par on the front nine with 3 bogies, a birdie and an eagle, but came to life on the back nine with another eagle and two birdies.
He challenged Vincent for the win but came up one stroke short and just missed becoming the tournament’s first back to back champion.
Vincent’s win earns him an exemption into the 2015 RBC Heritage Presented by Boeing PGA TOUR golf tournament on Hilton Head Island.
He told reporters that he is looking forward to the opportunity.
“I am really excited just to see where my game is but also have a chance to meet a lot of the big names that I have grown up admiring as a youngster.”
Vincent collected three collegiate victories at Virginia Tech during the 2013-14 season and became the first Hokie to win First Team All-America honours, the Players becomes his biggest amateur victory to date.
The Heritage will also be his first start in a professional event and he sees his game maturing.
“I think a lot of it has to do with just getting more experience,” Vincent said.
“Coming from a country where there’s not that many big tournaments and then coming and playing at the collegiate level, it’s just a big step and it’s continually been getting better. Fortunately my game has also been developing along the way.”Advertisement

Vincent hasn’t been home to Zimbabwe since last January, and thanks to summer classes (six hours, to be exact) and playing the summer amateur circuit, likely won’t get home for another six months.
He has fingers crossed that his mom Alison will make it stateside to see him play in the U.S. Amateur next month.
Virginia Tech was his first extended experience in the United States.
He grew up playing golf in Zimbabwe and learning the game from instructor Roger Baylis.
Hokies coaches recruited him after watching him compete in the Junior Orange Bowl International Golf Championship in Florida and signed the two-time Zimbabwe National Amateur champion.
Vincent said he doesn’t think he would have received the exposure, while playing for his country’s under-16 team at age 14, had he grown up anywhere else.
“I’ve still got a lot of learning to do,” Vincent said. “There are definitely a few things I need to get better at. It’s moving the right direction.”