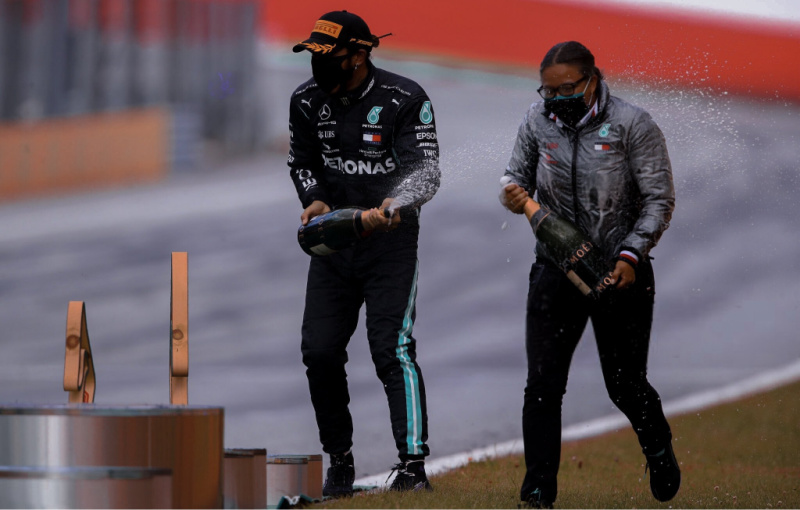 ZIMBABWEAN chemical engineer and Mercedes trackside engineer, Stephanie Travers was over the moon after earning “a once in a lifetime opportunity” to collect a trophy on the winner’s podium of a Formula 1 Grand Prix race in Austria on Sunday.

Following Lewis Hamilton’s victory at the Styrian Grand Prix, Harare-born Travers joined the British star on the podium to accept the Constructors’ Trophy on behalf of Mercedes-AMG Petronas team after they completed a one-two podium finish.

An elated Travers, who is part of Hamilton’s team, was excited with the experience which she described as a once in a lifetime opportunity.

“I’m very excited. Once in a lifetime opportunity. So I’m thrilled to have been chosen today,” she said in a video posted by the Mercedes team on their official Twitter account.

Six-time Formula One World Champion, Hamilton kick-started his world championship defence by romping to victory during the second race of the season at the Red Bull Ring while his teammate Valtteri Bottas finished second.

For many Zimbabweans around the world their focus was Travers after they spotted her on the podium collecting a trophy on Mercedes’ behalf.

England-based Travers was born in Harare to Maria and Bertram Travers and she is the grand-daughter of Pat Travers, the late chairman of Arcadia United FC.

Travers joined the Mercedes team as a Trackside Fluid Engineer last year after beating 7000 other applicants and going through a five-stage rigorous selection process.

The year long process was in preparation for the 2019 Formula 1 season. According to Giuseppe D’Ariggo, the managing director and group CEO of Petronas Lubricants International, “More than 7,000 applicants applied for the job, we were looking for the best.”

For A’Driggo, the best had to be talented, young, people with competence and full of passion for the sport.

Stephanie was born in Harare, Zimbabwe and scaled through a five stage selection process which culminated in an interview with the CEO of Petronas, D’Ariggo.