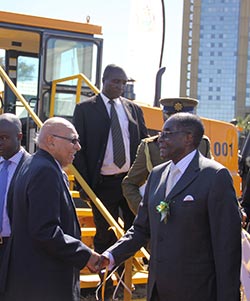 THE Zimbabwe National Roads Administration (Zinara) has found itself in the eye of a tender storm involving $16 million with counter accusations between the agency and the State Procurement Board (SPB).
Zinara stands accused of flouting tender procedures in the procurement of some 80 graders officially received by President Robert Mugabe. Local authorities now say the equipment is not suitable and some of the graders are reportedly lying idle.
State Procurement Board (SPB) executive chairperson Charles Kuwaza however told the Parliamentary Public Accounts Committee that Zinara had raised the graders tender contrary to what executives from the roads administrator told the same committee two weeks ago.
“We did not raise the tender or the specifications,” said.
“That the equipment is now lying idle is not our problem because they (Zinara) are the ones who provided the specifications for the graders that they required and our job was just to make sure that procedures of procurement were followed.
“I have not spoken to him and he has not complained to me about anything, procurement procedures allow aggrieved parties to approach the administrative court for recourse.”
Kuwaza was responding to questions from Zanu PF Hurungwe West legislator Rueben Marumahoko who wanted to know what transpired in the acquisition of the graders.
“Can you please explain what happened regarding the Zinara tender for the purchase of graders (because) the authority’s chief executive officer (Frank Chitukutuku) told this committee two weeks ago that you had not consulted him before the tender was given away,” Marumahoko said.
Kuwaza was taken aback by the information and said the SPB only approved acquisition of 40 graders, not 80.
“I am hearing it now and did not know that they received 80 graders. What we know is that they tendered for 40 graders and that is what we have in our minutes nothing more. If they wanted anything more they should have gone to tender again,” said Kuwaza.
Chitukutuku allegedly told the committee that he had not been consulted by the SPB when the 80 graders were purchased at an inflated price of $16 million when the original tender had been for $8 million.
Committee members could not ask any further questions and agreed that they needed to summon Zinara officials again.
Media reports last week claimed Chitukutuku had tendered his resignation in a cloud after Transport Minister Obert Mpofu reportedly began to ask questions about accountability at the roads administrator particularly funds from toll-gates.Advertisement

Chitukutuku whose term of office stretched to March 2015 will now leave office before the end of this year citing personal reasons.