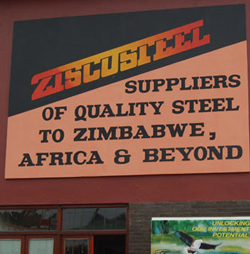 THE Zimbabwe Congress and Trade Unions (ZCTU) has condemned the seizure of company property at the collapsed Ziscosteel at a time the firm is looking for investors to revive its operations.
“While the attachments are part of our legal processes of enforcing rights and court orders, they are not the solution when production equipment is put under the hammer,” ZCTU secretary general Japhet Moyo said in an interview.
Recently, the sheriff of the High Court attached vehicles, machinery and other movable property at the Redcliff-based company over some $60 million owed to workers in unpaid salaries dating back eight years.
Last year, Finance Minister Patrick Chinamasa announced that all employees would be retrenched with the government taking over the company’s debts which are estimated at more than half a billion dollars.
Zisco – once one of the largest integrated steelmaker in Africa – ceased production back in 2008-9, brought to its knees by a fatal combination of mismanagement, corruption and political interference.
A billion-dollar rescue deal agreed with a unit of Indian conglomerate, the Essar Group, also failed to take after the investor was hounded and frustrated into giving up by cabinet ministers.
Moyo said political will and investor confidence were critical for the revival of Zisco which is majority-owned by the government.
“The solution for former Zisco workers is to allow investors to come on board and kick-start production so that the same workers get employment while the investor finds a way of paying off debts,” Moyo said.
“Political expediency should not be allowed to cloud or interfere with prospective investors like what we witnessed with the Indian investor, who was frustrated and forced to leave,” he said.
He added; “Victory, to us, is when the workers get their jobs back and a new life is breathed at Redcliff, Lancashire Steel and related industries.
“If it was not for our bad political decisions, Zisco could have found an investor long back. The conditions which were put on Essar scared away the investor.”
ZCTU said that the situation has left another Redcliff based steel making company Steel Makers with monopoly in the steel manufacturing industry in the country.
Said Moyo, “government is paying lip service to the Ziscosteel workers.”Advertisement