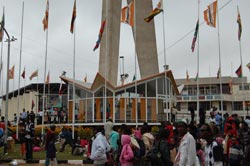 SOUTH Africa and China have the highest number of exhibitors at the Zimbabwe International Trade Fair (ZITF) which opened in Bulawayo on Tuesday.
ZITF chairman Bekithemba Nkomo said on Monday that with 95% of exhibition space sold, South Africa and China had the largest representation. “South Africa has booked the largest exhibition space after taking up 800m² square metres – up from last year’s 400m².
“China has maintained its 600m² square metres that it had taken up last year.”
Malawian President Joyce Banda will officially open the international trade fair on Friday.
Analysts have speculated that the high interest from South Africa and China was a reflection of the race between the two countries to make inroads into Zimbabwe’s economy.
South Africa’s Deputy Trade and Industry Minister Elizabeth Thabethe is scheduled to address a business breakfast tomorrow. Issues for consideration at the meeting include funding and access to markets for small to medium-size enterprises.
The instability in South Africa’s mining has made Zimbabwe a lucrative destination for investment in the sector, while the “Look East” policy President Robert Mugabe embarked in 2003 had endeared the country to the Chinese.
“Given the possibility of elections in 2013, investors are readying themselves for a move into Zimbabwe,” said Trevor Maisiri, a senior analyst based at the Johannesburg office of the International Crisis Group.
“Investors are also now at a point where they are willing to work with whomever wins elections and runs the government. They are positioning themselves to move into Zimbabwe.”
South African resources companies have vast interests in the Zimbabwean mining sector. These include Impala Platinum, Anglo American Platinum and Pretoria Portland Cement.
SA companies also have a strong presence in the Zimbabwean financial services sector and operate two banks — MBCA, a subsidiary of Nedbank, and a unit of Standard Bank, Stanbic.
Further, state-owned South African Airways has tapped into Zimbabwe’s airline industry, following the demise of national carrier Air Zimbabwe, since 2009.
It has also emerged that South Africa has overtaken China as the largest buyer of Zimbabwean tobacco, since the selling season began in February.Advertisement

Meanwhile, Air Zimbabwe officials said they were on course with their “restructuring exercise” after the national carrier resumed domestic and regional daily flights two weeks ago.
Air Zimbabwe will double the number of flights from Harare to Bulawayo to match increased demand during the ZITF and will run a morning and evening flight schedule.