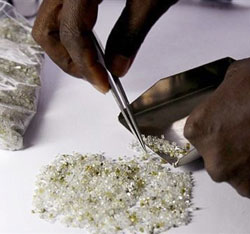 INDIA’S small and medium diamond industry, badly hit by a weak local currency, expect the European Union’s (EU) to lift sanctions on diamonds from Zimbabwe to help ease skyrocketing rough gem prices.
The EU has lifted sanctions on the state-run Zimbabwe Mining Development Corporation (ZMDC), allowing the rough diamond imports into EU. The company is heavily involved in diamond mining in the country’s gem-rich Marange district.
EU sanctions were originally imposed against Zimbabwe in 2002 over allegations of political violence and human rights abuses and claims the government had also failed to hold free and fair elections.
The flow of cheap Zimbabwe diamonds, according to industry leaders, into Antwerp is set to soften the rough diamond prices of the big diamond mining companies like De Beers, Alrosa, Rio Tinto and BHP Billiton. Zimbabwe has the potential to supply around $4 billion worth of diamonds per annum.
Small and medium diamantaires in India’s Surat region – the world’s biggest diamond cutting and polishing centre – had stopped purchasing rough diamonds due to 20 per cent increase in their price since January 2013.
Belgium’s Federal Public Service Economy recently sent a note to Antwerp World Diamond Centre (AWDC) in Antwerp saying that European Union (EU) sanctions on ZMDC had been lifted.
The development means that rough diamonds from Zimbabwe with Kimberly Process Certificates will be permitted into EU beginning September 25.
“Until now companies based in Belgium, including Indian firms, could not buy and import rough diamonds into Antwerp,” said Indian diamond analyst Aniruddha Lidbide.
“After EU’s decision to lift sanctions on ZMDC, firms in Antwerp can now import rough diamonds and sell them to the manufacturers in India and other centres.”
He added: “Now ample rough diamonds will be available for consumption in the market, as Zimbabwe produces around 25 per cent of the world diamonds. This would force other diamond mining companies in the world to soften their prices.”
Moreover, only the diamond workers in Surat have the expertise of manufacturing Zimbabwe diamonds due to their size and colour. Most of the rough that would be imported by Antwerp will come to Surat for cutting and polishing.
India imports rough diamonds worth about $11 billion per annum. Around 80 per cent of the diamonds are imported from big diamond mining companies, while the rest come from Antwerp.Advertisement

Surat Diamond Association president, Dinesh Navadia, said: “The big diamond mining companies would be compelled to reduce their rough diamond prices as the cheap Zimbabwe goods have officially entered the market.
“Tens of thousands of carats of Zimbabwe diamonds would flow into Surat market. This will end all the problems faced by the small and medium diamantaires.”