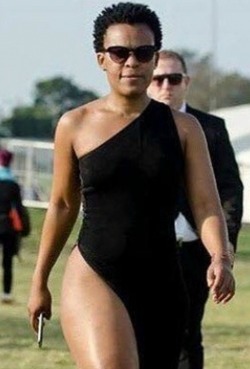 Zodwa Wabantu claims that “politics behind closed doors” was the reason her performance at a private club in Zimbabwe over the weekend was cancelled at the 11th hour.
Speaking to TshisaLIVE, an angry Zodwa said she received a text message late last week, while in Mozambique notifying her of the cancellation. The entertainer claimed that she was advised to tell fans she was “too sick to perform”.
“The show was cancelled at the last moment, they said I must tell everyone that I am sick and they would send me money to cover the trouble. It’s a political thing. It was politics behind closed doors because apparently people were protesting that they want me to perform and sponsors were pulling out of the event because reports about me were drawing too much (negative) attention to the event,” Zodwa said.
A fuming Zodwa then cancelled another performance at a club in Harare because she “felt disrespected” by authorities in the country.
“I was originally told not to come because of the way I dress but everyone knows that I don’t wear panties. It is not like I walk around and lift my skirt to show everyone that I don’t wear underwear, so why are people so upset? They should fix themselves before they try to fix me.
“I am angry that they are always dragging my name and brand through the mud. The (media) reports have all been about what they say about me and how they are trying to stop me performing. I have had enquiries from around the world but they have all wanted to know more about my trip than about my career. It is not right,” she said.
Despite the controversy surrounding her performances in the country, Zodwa said she would return to Zim in the future but it would be on her own terms.
“I love Zimbabwe and my fans there love me. I can’t let them down. I will return but I need time and to do it properly,” she said.
Zodwa has hogged headlines for the past few weeks after she was billed to perform at the Harare International Carnival. Zimbabwean authorities initially stated that she would only be allowed to perform if she wore underwear, then issued an apology, which was short lived.
Two weeks ago authorities issued a ban surrounding Zodwa’s performance after a complaint was laid by local actress Anne Nhira.
Anne questioned why a South African was being used to perform when there were many young Zimbabweans who were working hard and were more than capable of doing the same job.  Zodwa responded by lambasting the actress and accusing her of dividing the continent.Advertisement