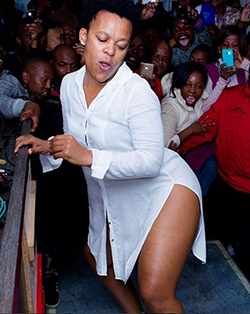 SOUTH Africa: Zodwa Wabantu seems to be ruffling more Zimbabwean feathers after she reportedly refused to remove a controversial sketch of her, Zimbabwean President Robert Mugabe and his First Lady Grace from her social media account.
The sketch shows Zodwa lifting her leg and supposedly showing her lack of undies to Mugabe which leaves his tongue hanging out. Grace is in the background looking very unimpressed.
Zodwa, who has been at loggerheads with Zimbabwean officials since she was banned from performing at the Harare International Carnival because she refused to wear underwear.
At the time, President Mugabe lambasted Zodwa for attending parties without wearing underwear.
He said: “I’m sorry we disappointed many men… You just come without covering your decency. What do you want? Men to see you? We don’t want such…”