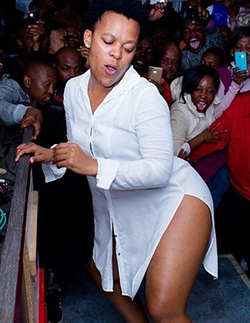 SOUTH Africa: Zodwa Wabantu is looking to strengthen her African network by meeting Zimbabwean President Robert Mugabe, a meeting she said she is in the process of negotiating.
The entertainer revealed in an interview with TshisaLIVE that despite the controversy around her gigs in Zimbabwe, she’s been in contact with people “arranging a meeting” with Mugabe.
“I want to meet him because I have heard a lot of things about him. Like when I first went there, I was told he would chase me out, but he didn’t. So I want to get to know him properly. If I do meet him I will ask him a lot of things,” she said.
The entertainer said she has been in communication with officials who have said they will help set up the meeting.
“They called and asked to meet me and I said yes. They haven’t called about the time but they want to talk about me potentially meeting him (Robert Mugabe),” she said.
Zodwa hogged headlines last month when her invite to a carnival in Zimbabwe called her “no panty” rule into question.
“I’m sorry we disappointed many men,” said Mugabe before questioning why Zodwa would attend parties without underwear. “You just come without covering your decency. What do you want? Men to see you? We don’t want such,” Mugabe said at an interface rally in front of a 10,000-strong crowd in Bindura.
Although she admitted  she was not impressed by the “fiasco,”  she was flattered that she was “important enough for the president to speak about”.