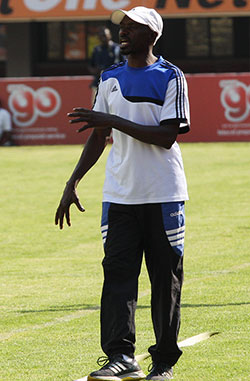 ZPC Kariba 2-1 Dynamos
ZPC KARIBA took a giant step towards landing the title when they edged Harare giants Dynamos 2-1 in a premier league tie at the National Sports Stadium on Saturday.
Dynamos took an early lead in the first half through an Anesu Gondo goal.
However, ZPC Kariba turned the tables against Dynamos in the second half through goals by Tsepo Ranthoakane and Limited Chikafa.
ZPC Kariba coach Saul Chaminuka was full of praise for his charges.
“The boys really did well and even when we were trailing their attitude showed me that we were going to find our way back into the game,” he said.
“You ought to give credit to these guys, it’s not easy to come from behind and beat Dynamos at this stage of the competition. But God has a plan for us this season.”
Dynamos coach Callisto Pasuwa lamented the many chances wastd by his side.
“It’s unfortunate we failed to defend the early lead we got. We also had many chances to extend the lead but we missed a number of chances while they took theirs,” he said.
The victory means that ZPC takes the lead on the log with 56 points, two more than their biggest rivals with just a single game to go.
“The title is now ours to lose, it has been a very long and turbulent journey but we have taken a very big step to wrapping it up now.
“Of course, we still have work to do against Caps United but the league is now ours to lose,” said Chaminuka.